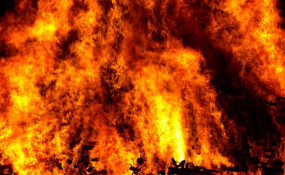 Most of the victims were burnt beyond recognition.

The bus had over 60 passengers on board, while the truck was laden with tyres when tragedy struck.

The accident took place around 8pm and by midnight the bus shell was still smouldering, with bodies inside.

Witnesses said more than 15 passengers managed to escape through the windows.

The injured were rushed to Mvuma District Hospital and Driefontein Mission Hospital.

By late last night, police were still guarding the shell of the bus, with the charred remains of some of the passengers.

Police were also controlling traffic as the burning vehicles blocked the road.