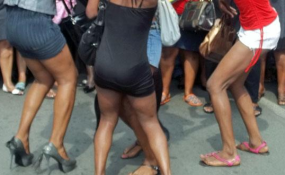 A 52-Year-Old woman from Mwenezi died after she was heavily assaulted by fellow drinkers who were unhappy with a miniskirt she was wearing on the day, a High Court judge heard recently.

According to the state in a case of murder brought before Justice Garainesu Mawadze, Lessie Temai died on 21 March 2015 after she was assaulted by fellow villagers, Toresai Gambiza, 45 and Personally Ngundu, 27.

Temai, Gambiza and Ngundu were part of a group of drinkers gathered at a local homestead for a traditional brew. Ngundu and Gambiza then scolded Temai for wearing a miniskirt. However, Temai did not take kindly to being criticised for her attire and insulted the two men.

Angered by her reaction, Ngundu and Gambiza assaulted Temai until she lost consciousness and died on the spot.

Ngundu fled from the scene and has been on the run since then, but Gambiza was arrested on the day and charged with murder.

However, Gambiza pleaded not guilty and told the court that he only picked the switch used in assaulting Temai, as exhibit after Ngundu threw it away and fled from the scene.

Gambiza implicated Ngundu for assaulting Temai with a switch. He said Ngundu proceeded to kick her with safety shoes on the chest, leading to her to falling headlong.

A post mortem report compiled by Dr. Godfrey Zimbwa and produced in court as an exhibit, showed that Temai had facial and scalp bruises, multiple bruises on the chest and bleed from the mouth.

However, Justice Mawadze found Gambiza not guilty of Temai’s death and accused the state of giving contradictory evidence and failing to prove the case of murder against him.

“The contradictory evidence led by the state cannot even possibly sustain the conviction of the accused on a permissible verdict of culpable homicide,” Justice Mawadze said in his ruling.

“Despite the accused’s spirited defence, we are satisfied that the accused indeed assaulted the now deceased. It is the nature of that assault and it’s consequences which is unclear. The accused benefits from that or lack of clarity. The verdict is not guilty. Accused to pay a fine of $150,” Justice Mawadze said in a ruling passed last month.