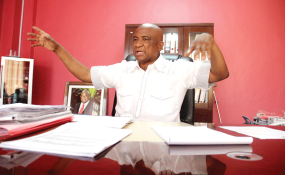 Chiyangwa, elected the Council of Southern Africa Football Associations (Cosafa) president in December, has been at loggerheads with Hayatou after last weekend’s decision by the regional body to publicly back Ahmad in the race for the CAF presidency next month.

The Zifa boss is also Ahmad’s campaign manager and has been rallying support around the continent in the first serious sign of dissent that Hayatou has faced since he became president in 1988.

Last week Chiyangwa hit back at CAF over accusations he is trying to “destabilise the continental football mother body” after his decision to invite football leaders, including Fifa boss Gianni Infantino, as well as African football association presidents to Harare this week.

While Chiyangwa says this week’s meeting is to celebrate his ascendancy to the Cosafa presidency, CAF views it as a ploy against Hayatou’s leadership in a move that is likely to put Zimbabwe’s football under spotlight.

Hlongwane said the government was fully behind local administrators venturing into leadership of regional and international organisations.

“The current discussion that is going on between the Cosafa/Zifa president (Chiyangwa) and the CAF president situates around the politics of mandate renewal. As government, we are fully behind the principle of democratic accountability through renewal of mandates of those that are in office and we are quite cognisant that the process of renewing mandates is unpredictable in terms of what it leads to,” he said.

Hlongwane, however, cautioned that his statement was not tantamount to supporting particular individuals, but all local sports administrators, citing Zimbabwe Aquatic Union president Mary Kloppers, who sits on the Cana board and Fifa referees instructor Felix Tangawarima.

“We support that our local sports administrators must go up and influence decision-making in regional, continental and international confederations. This is not akin to supporting individuals. We support the principle of deployment of cadres from Zimbabwe into these organisations. We have taken a position as a ministry,” Hlongwane said.

The minister said he was looking forward to meeting Fifa boss Infantino, who has since confirmed his coming to Zimbabwe.

Infantino’s visit, however, comes at a time when Zimbabwean football is facing a myriad of problems, including a crippling $7 million debt.

In his election manifesto, Zifa president Chiyangwa said he had a plan to address the debit problem since he was a businessman with connections in the corporate world.

However, a year down the line in Chiyangwa’s presidency, the debt is still there and there appears to be no solution in sight.

At the moment, there are no junior football structures in the country, with Zifa last year withdrawing the national Under-17 side from continental and regional competitions, citing budgetary constraints.

In contrast, other African countries are investing in their junior teams that will represent them at the international stage in the future — none of which is happening in Zimbabwe at the moment.