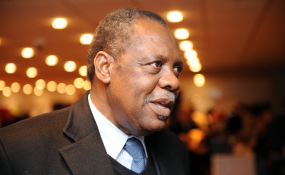 Phillip Chiyangwa might have his own faults but the Zimbabwe Football Association (Zifa) president has won a lot of admirers in African football after taking the long-serving Confederation of African Football (CAF) president Issa Hayatou head on.

Hayatou has been at the helm of African football for the past 28 years and never at any one time has an African football association leader been bold enough to come out in the open to oppose the Cameroonian’s leadership in the manner that Chiyangwa has done.

The flamboyant Harare businessman has come out in the open and has declared his support for Madagascar’s Ahmad, who is challenging Hayatou in the March 16 CAF presidential elections — the first time in his long reign that Hayatou is facing a serious challenge for his position.

Since his ascendancy to power in 1988, Hayatou has ruled African football with an iron fist, turning African football leaders into “yes men” who have not been able to oppose his decisions — even when they were wrong.

On two occasions, Africa was humiliated after backing the wrong horse in the Fifa presidential polls. In 1998, Africa backed European football chief Lennart Johansson, who went on to lose to Joseph Sepp Blatter.

In last year’s elections, Africa also backed Prince Ali Bin Hussein of Jordan in elections which were won by Italian Gianni Infantino after the Prince of Jordan failed to garner enough votes to reach the final election round.

Hayatou’s reign has also not been milk and honey for southern, East and Central Africa. He has made plenty of promises yet his track record has shown that he clearly favours West Africa, where he comes from.

Statistics reveal that since Hayatou’s election, southern Africa has hosted the Africa Cup of Nations on only three occasions — in South Africa in 1996 and 2013 and in Angola in 2010.

West Africa has been awarded the rights to host the contest in Hayatou’s home country of Cameroon in 2019, and later in the Ivory Coast in 2021 and in Guinea in 2023.

Yet the Cecafa region, for which Tanzania, Rwanda, Kenya, and Uganda are also members, are still to host the tournament under Hayatou’s reign while north Africa has hosted the competition also on three occasions.

This is the gap that Ahmad has pledged to close and it is normal for Chiyangwa as the Cosafa president to offer his support for someone closer to home.

More importantly for Chiyangwa and Zimbabweans in general, is the fact that the long-serving Caf president has never been a friend of the small southern African country.

Right in front of the Caf president — during the official player presentation for the 1998 Caf Champions League final — Dynamos’ influential captain Memory Mucherahowa was head-butted and missed the final which Dynamos eventually lost 4-2 to Asec Mimosas after being rushed to hospital for treatment.

Hayatou and Caf never took any action over the incident and 19 years later, has not apologised or said anything about it.

In 2000, Caf also withdrew Zimbabwe’s right to host the Africa Cup of Nations finals on the excuse that Zimbabwe did not have up-to-standard stadia facilities.

However, the truth was that Hayatou was pursuing a personal vendetta after the then Zifa president Leo Mugabe was accused of voting for Blatter against a Caf decision to back Johansson for the Fifa presidency.

With the National Sports Stadium and Barbourfields Stadium a sure bet to host the finals, Zimbabwe invested heavily in upgrading Sakubva Stadium, Ascot Stadium and Mucheke Stadium, only for Caf to withdraw the country’s well-deserved rights to host the tournament.

Ironically, two years earlier, Burkina Faso — which only had two stadiums — had hosted the same tournament.

Those stadiums did not even come close in standards at Rufaro Stadium, Barbourfields Stadium, the National Sports Stadium or to Sakubva Stadium in Mutare.

The 15-member Caf executive committee which Hayatou chairs has the final decision on who hosts the Africa Cup of Nations finals, and Zimbabweans have not forgiven the Caf president for taking away that 2000 tournament.

Madagascar was supposed to host the Africa Under-7 Championship in April but that right was withdrawn on January 12 following a trip to the country by the Caf Inspection Committee.

suspicion is that this had something to do with Ahmad’s challenge of Hayatou. The tournament has been taken to West Africa where it will be hosted by Gabon, this time in May.

As Ahmad’s campaign manager, Chiyangwa has made it clear that he has aligned himself with the Ahmad camp because he feels the Madagascan offers a better future for African football.

As a result, the Zifa president has received thumbs up from those who closely follow African football in Zimbabwe and from across the continent who feel that a clean sweep of the current African football leadership is long overdue.

To them, a new crop of African football association leaders has emerged whose trademark is their relative youthfulness, energy and vision, and should take over at Caf.

Surely, the wider football world is changing and logic dictates that Africa cannot remain immune from this trend. After 28 years in office, Hayatou no longer has anything new to offer and it is time for him to go.

This is the time for change.