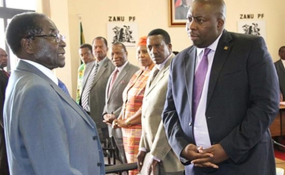 Addressing journalists at a media briefing in Harare, Mliswa said the demonstrations and petitions mobilising for the youthful minister’s ouster were immaterial as President Robert Mugabe had the final decision on his fate.

“Kasukuwere has been a good dog for the First Family and he has gotten rid of all factions. If your good dog bites your child you will only have two options; to kill it or to cage it, so they would rather put him in a cage than kill him,” Mliswa said.

He said if ever there was anyone to blame for the chaos currently rocking the ruling party, it was President Mugabe, who he said had used divide and rule tactics which would cost him eventually.

Mliswa said the utterances by Vice President Phelekezela Mphoko, who came out in support of Kasukuwere was a clear sign that the embattled political commissar would survive the chop.

“It is pretty clear that this case is not going anywhere anymore. The chairperson of the appeals committee the Hon Vice President Phelekhezela Mphoko has given a decision already before the matter comes before him, that this is factional, that this is Mutsvangwa fighting Kasukuwere,” he said.

“So, the chairperson of the appeals committee has spoken. And no one in terms of the structures of the party has questioned what he has said,” he said.
Mliswa said the Vice President could not have said what he said without the blessings of President Mugabe.

“I believe he cannot say that without speaking to His Excellency. He has the ears of His Excellency he has the right to go and see him on different issues. When I read his comments I realised nothing is going to happen (to Kasukuwere),” he said.

While addressing former Zipra and Zapu members in Bulawayo at the weekend, Mphoko said Kasukuwere was being persecuted by persons loyal to ousted war veterans’ leader, Christopher Mutsvangwa, who wanted to replace him with their own person.

He said those fighting Kasukuwere were not genuine as they never raised a voice when the first family was being insulted.

Mliswa said those within Zanu PF should understand that they created a one centre of power hence, President Mugabe and his wife had the final say in the party.

“The appropriate organ for Kasukuwere is the politburo and who appoints the politburo, it’s the president. The Politburo happened and he was not discussed, the fighting continues, the mobilization continues and His Excellency is quiet on it.