The parents of Supuni moved to Zimbabwe when he was two months old.

In 1989 Supuni joined a catholic youth group in Tafara, just outside Harare, where he got lessons in sculpture from Tapfuma Gutsa. The group later moved to Silvera House.

In 1991, Supuni spent six months in Tanzania within a cultural exchange program. There he learnt various other techniques such as print making, lino cut and etching. After his return to Zimbabwe he continued work at Silvera House until 1996. Later he became artist-in-residence in Chapungu Sculpture Park.

In the fall of 1999, Amos was artist in residence at Florida Southern College where he created sculptures and taught a stone sculpture class.

In 2002 Supuni went to Utah to teach stone carving. 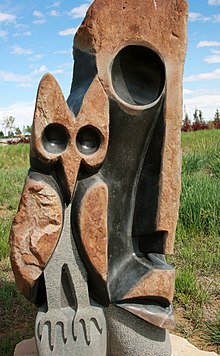 N’anga and His Owl, by Amos Supuni. At night the N’anga (traditional healer) sends his owl to learn the secrets of the village

Supuni died before his forties and left a widow. He was killed in search of food for his family in neighboring Mozambique .

In his work Supuni refers to contemporary social issues concerning street kids, homelessness and poverty. On the other side, his images show joy, such as the pride of a father holding his newborn child. In addition he uses cultural icons in his work.

Supuni made his sculptures mostly in the hard Springstone, but also used mixed media, such as a fusion of wood, stone and metal in his work Hwata (secretary bird), which was displayed on Atlanta airport.

Being an artist is one thing and being a female artist is another, as in …