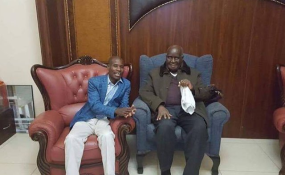 The founding father of the Republic of Zambia turned 93 on April 28 and was given the sculpture of a hand holding a white handkerchief, his trademark symbol for peace.

In an interview, Benhura said he was asked to carve the piece by Leonard Chidziwa (27) who is a family friend of the Kaundas. “I was asked to work on the sculpture by Chidziwa who said they wanted to give it to former president Kaunda as a birthday present.

“Apparently, Chidziwa is friends with Dr Kaunda’s eldest son Pangi and they were both happy with the sculpture. “I was then invited to Zambia for the presentation of the sculpture and Dr Kaunda liked the sculpture,” said Benhura.

Asked why he approached Benhura to work on the sculpture Chidziwa said he had been following his works for some time. “We couldn’t think of anyone better than Benhura because not only do we know his works but we have also worked with him on a number of projects,” said Chidziwa.

“Everything was above board and it only goes to show the cordial relations between the two countries,” he said.

Benhura has in the past made sculptures for other African iconic leaders who included former South African President Nelson Mandela and President Robert Mugabe. His art has been exhibited both locally and internationally, and he has earned multiple industry awards for his work.

Benhura has been credited for helping to transform traditional Shona stone sculpture into a world-class modern art.