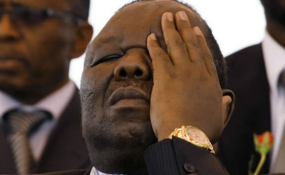 The MDC-T leadership has admitted that it is failing to pay about 110 employees after foreign donors dumped the party, which is now looking up to Government for salvation.

The party, which claims to be awaiting $2 million from Government under the Political Parties Finance Act, received $800 000 in December last year, out of the $1,2 million they were allocated by Treasury.

The $800 000 was reportedly used by the leadership for “other party programmes”.

In March, more than 62 MDC-T workers held a demonstration at the opposition party’s headquarters in Harare after going for more than 17 months without salaries.

About 62 employees, some of them who were representing the MDC-T National Workers’ Committee, besieged Harvest House demanding to be addressed by the opposition party’s secretary-general Mr Douglas Mwonzora over the matter.

In an interview, MDC-T spokesperson Mr Obert Gutu said they were owed $2 million by Treasury in terms of the Political Parties (Finance) Act.

“The MDC is a social democratic political party, firmly rooted in the labour movement’s historic fight for social justice and equity,” he said. “We are doing our level best to pay our party workers in these very difficult economic and financial times.

“We are owed close to $2 million in terms of the Political Parties (Finance) Act, but Treasury has not been forthcoming with the money.

“Like any other employer in Zimbabwe at the moment, we are facing challenges, but then we are doing our very best to ensure that our employees are paid.”

In March, Mr Mwonzora confirmed that they were in arrears, but dismissed reports that they had not been paying the workers for the past 17 months.

He admitted that the party owed its workers varying amounts.

Sources who attended the meeting in March said the employees were first addressed by MDC-T national chairman Mr Lovemore Moyo and his deputy Mr Morgan Komichi, but they “rubbished them” demanding to be addressed by Mr Mwonzora.

Mr Mwonzora was later reported to have engaged only three top representatives from the workers’ committee, but this did not go down well with the other employees, who later besieged his office.

In September last year, MDC-T sacrificed three vehicles to save party leader Mr Morgan Tsvangirai’s house in Strathaven, Harare, from being auctioned over $55 000 owed to a local bank.

Mr Tsvangirai had his property, Stand Number 2 Strathaven Township, earmarked for attachment over non-payment of a loan extended by Afrasia Bank Zimbabwe Limited three years ago.

While the property was facing the hammer, the MDC-T leadership — through its company called Laphonic Investments situated at Harvest House in Harare — came to the politician’s rescue and offered three party vehicles for attachment and execution.