A protester holds up a street sign with President Robert Mugabe name on it as Zimbabwe opposition supporters clash with police during a protest march for electoral reforms on August 26, 2016 in Harare. Riots erupted in Zimbabwe’s capital Harare after police fired tear gas and beat protesters who responded by throwing stones in the latest of a string of tense demonstrations.

It’s the land of pop-up protests.

Using hashtags and spur-of-the-moment public demonstrations, Zimbabweans are demanding reforms — and the departure of 92-year-old president Robert Mugabe, who has led the country since its independence from Britain in 1980.

The trend started in April with Pastor Evan Mawarire, who wrapped himself in Zimbabwe’s green, yellow, red, black and white flag — with an African fish eagle at the center – and posted a plaintive Facebook/YouTube video recording.

The 39-year-old Baptist preacher said he couldn’t afford to pay his daughter’s school fees and was fed up with the government’s failures, broken promises and the crippled economy. He captured the national mood of discontent with a slogan — #ThisFlag.

The government responded by making it illegal and punishable to use the flag without permission. The justice ministry issued a statement in September: “Members of the public who participate in any action or activity involving the national flag or bringing the national flag into disrepute are warned they are liable to prosecution.”

“Members of the public who engage in any action or activity, which involves the manufacture, sale or use of the national flag in contravention of the law are therefore warned that they are liable to prosecution and are liable to imprisonment if they are found guilty by a court of law.”

The penalty is a $200 fine or up to six months in prison.

Within months, online protests spilled onto the streets of the capital, Harare, and beyond, calling for Mugabe to go. Mawarire and others led a successful nationwide shutdown in July. Civil servants, including teachers, doctors, nurses, public transportation drivers, and almost the entire private sector stayed home. Scores of people were detained. Then followed a series of demonstrations.

“We have to do something about our anger,” says Mkwananzi, 34. “The focus now is on citizen activism, where citizens express themselves in a peaceful and nonviolent way.” 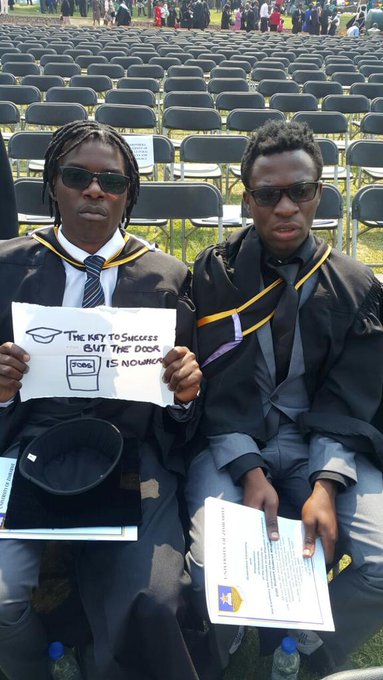 Hashtag activism is a new way of challenging the establishment in Zimbabwe — and it’s mainly youthful. Campaigners include unemployed university graduates, who go by the name #ThisGown. They specialize in pop-up protests, wearing graduation gowns and mortarboards. Fully dressed, they play soccer with handmade balls on street corners or perform other capers. Graduate and activist Nqobazitha Mlambo, 24, says the message is: “We have no jobs.”

“Because of the nature of the dictatorship we are under, you are forced to embrace the use of social media,” says Mlambo. “It’s not secure to try and use the tactics used in the ’90s — demonstrations openly or on a daily basis — because we can never match the current government when it comes to violence. So we have resorted to a peaceful, constitutional revolution, which we are precipitating through the use of social media.”

“#ThisGown is a new social movement in this country where the unemployed graduates — I’m a recent graduate as well — 30,000 of us are saying enough is enough. We were promised 2.2 million jobs in 2013 by the current government. Yet they’ve done nothing. It’s a direct indictment of the opposition ranks as well as the government [for failing] to address the problems bedeviling the ordinary people in this country.”

In the past, it’s been Zimbabwe’s traditional opposition Movement for Democratic Change party that was the main voice against the government. That changed this year says, Tajamuka’s Promise Mkwananzi.

“The major limitation of the opposition political parties has been that they’re strait-jacketed, they’re rigid,” says Mkwananzi. “Now we have created platforms where people can operate freely, can participate very easily. One of the major, major, major differences is the centrality of the social media in the whole equation.”

Supa Mandiwanzira, Zimbabwe’s minister of information communication technology and a former journalist, says the government is not against the use of social media: “Let’s use it for development, for empowerment, for information-sharing but not for destabilization.”

Mandiwanzira adds: “The problem we have is those who use the platform of social media to cause alarm and despondency, to call for civil disobedience, violent protests, disobedience to the security forces and the police and [to] call for the bombing of police stations and supermarkets. I don’t think that would be acceptable — not even in the United States or any sane country.”

The minister says Mugabe is concerned about “the abuse of social media, not the useof social media. Even we in government, in the Zanu-PF party, are using it to our best advantage.”

Backed by chanting supporters, Mugabe has responded to dissent with a threat: “Once you begin to interfere with our politics, you are cooking trouble …. We know how to deal with our enemies who have been trying all along to bring about regime change in the country. We have the means to defend and protect our hard-won freedom. I want to warn them to desist from it. Please stop it.”

The security crackdown was followed by a blanket ban on protests in the capital, Harare, and other parts of the country, which is being contested by the political opposition, hashtag and civic groups.

“In the streets they are now using police brutality against us,” says Linda Tsungirirai Masarira from #Tajamuka, “which has found many of us — including myself — thoroughly beaten up, severely assaulted, arrested and all.”

Like Promise Mkwananzi, she has spent time in prison this year, charged with public violence. Tsungirirai Masarira, who was in solitary confinement for 18 days after she mobilized women prisoners to seek their rights, says Mugabe and his security agents know only brutal force to muzzle critics. Political analyst Earnest Mudzengi says hashtag activism may be a new force, but there doesn’t appear to be proper coordination among the groups or with Zimbabwe’s established opposition.

Women of Zimbabwe Arise (WOZA) and others are protesting under the banner #BeatThePot, banging empty pots, because there’s no money for food, they say.

“We have #tajamuka there, we have the civil servants doing their own thing. So one of the problems is that there is no cohesion between certain online protests and offline activities, extending to the grassroots action on the ground,” says Mudzengi.

He says, for instance, after the shutdown succeeded, all participants should have held a joint news conference, but each group organised its own. “I wouldn’t say we have cohesive protest actions. In fact, one of the problems we are having in the country is that of fragmented protest actions,” he says.

But this new-style opposition has galvanized the likes of attorney Fadzayi Mahere, who joined in the demonstrations.

“I was there obviously to voice my discontent and protest,” she says, “and I think it’s important to lend my voice to the choir of discontent. It all hangs on trust and confidence. The constitution guarantees us the right to gather, to assemble, to protest, to demonstrate.”

And Zimbabwe’s protesters say they won’t give up.

Share
Previous Zimbabwe Finance Minister Patrick Chinamasa – Don’t know if Bond Notes will work but we have no other options
Next South African Rand: The best currency solution for Zimbabwe not worthless Bond Notes