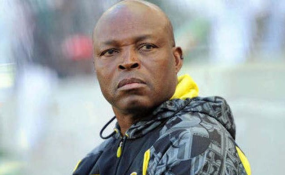 PC Kariba coach Sunday “Mhofu” Chidzambwa was yesterday involved in a car accident which left one man injured in Kariba.

Chidzambwa who is the ZPC Kariba coach was a passenger in a vehicle that hit a pedestrian and then ploughed into a house.

The pedestrian identified as Courage Ndoroyerwizi was taken to Kariba Hospital where he was admitted after suffering bruises on his arm and injuries to his right leg.

One of the on-lookers said the vehicle, a Honda Fit was not seriously damaged.

Chidzambwa was not picking up his phone yesterday, but he visited the victim in hospital.

ZPC Kariba are inactive this weekend and they trained under assistant coach Oliver Matava who was being aided by goalkeepers’ trainer Msiska and team manager Paul Chimalizeni.

Chidzambwa did not attend the training session.

Their home match against CAPS United was postponed after the champions were invited to take part in the Independence Cup tournament, which gets underway on Sunday with semi-finals in Harare and Bulawayo.

Makepekepe will face bitter rivals Dynamos at the National Sports Stadium for a ticket to play in the Uhuru Cup final scheduled for next Tuesday as part of the country’s Independence Day celebrations.

Highlanders will host FC Platinum in the other semi-final at Barbourfields.

The final will be played at the National Sports Stadium while the losing semi-finalists will clash in the third place play-off at Barbourfields on Independence Day.

But the rest of the league programme will continue tomorrow with Shabanie Mine hosting Bulwayo City while newboys Yadah Stars have a tough test awaiting them in Beitbridge where they take on Tsholotsho.

Source :
herald
Share
Previous Cops in the Dock for Assault
Next Zifa in Agents Crackdown