Chinotimba Under Fire Over Chinx Video 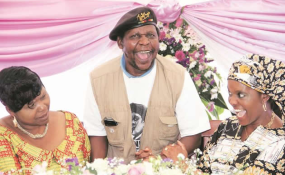 War veteran and Zanu PF member of parliament Joseph Chinotimba has come under fire after he filmed critically ill fellow veteran Cde Chinx on his hospital bed and released the video on social media.

Social media users were outraged by the apparent violation of Cde Chinx’s privacy as a patient and accused Chinotimba of poor judgement.

In the video, Chinotimba can be heard asking Cde Chinx, real name Dickson Chingaira, whether they were playing good music for him in hospital.

Chingaira, a veteran musician, is barely able to talk and appears unable to even recognise the ruling party legislator.

“How can an MP, Chinotimba go to see Cde Chinx in hospital and takes a video and the video is now on social media showing Cde Chinx in a bad state.

“Please leave Cde Chinx in peace and let us respect his privacy. Shame on you Chinotimba.”

Cde Chinx has been unwell for some time and was recently admitted at a Harare hospital after his condition deteriorated.

He was reportedly admitted last Friday and his family had to deny social media claims that he had passed on during the week.

The veteran musician is well known for liberation songs such as ‘Maruza Imi Vambambepfumi’ which became a ‘national anthem’ in the 80s.

Deeds Chingaira, a brother, said the veteran singer has been battling an unknown ailment since 2013.

“He thought it was arthritis or TB but he got tested and results were negative. He has been to several doctors but still they cannot diagnose what eating him.”

He added that Cde Chinx has also been to self-styled prophets to no avail.

Source :
newzimbabwe
Share
Previous Highlanders Edge Tsholotsho 2-1
Next Man Has Wrist Chopped Off in Fight With Husband of His Lover