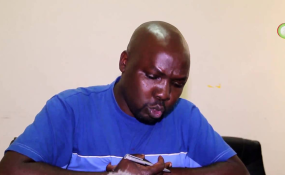 A former Zanu-PF Mashonaland Central youth chairperson, who is accused of trying to illegally topple President Robert Mugabe, had his application for freedom thrown out after court ruled that it was too early for him to complain.

Godfrey Tsenengamu, 34, through his lawyer, Zivanai Macharaga applied to be removed from remand arguing that the State was taking too long to prosecute him.

“On his last appearance, we were told that there is one outstanding statement and today the State is singing the same song.

“As such, it is unfair to keep the accused on remand. The State can always continue by way of summons,” said the lawyer.

Prosecutors told court that outstanding was a witness statement from Daily News before asking the case to be remanded to June 30.

Tsenengamu is also accused of convening a meeting where he allegedly incited war veterans to turn against Mugabe without first seeking permission from authorities as required by the law.

It is state’s case that his address, Tsenengamu claimed that Mugabe was not presidential material, adding that his successor was vice president Emmerson Mnangagwa.

The State further claims that he said, “It is time we go open about this succession thing because some of us have since identified our candidate and its none other than Emmerson Mnangagwa. If Mugabe doesn’t like him, it’s up to him but we are now saying we want him to lead us.

Tsenengamu, together with other rogue youths, were expelled from Zanu PF last year for alleged indiscipline as they had gone on the rampage attacking Mugabe using their Facebook pages and the private media.