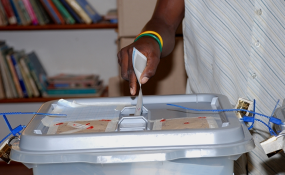 CRISIS In Zimbabwe Coalition has warned that the 2018 elections will likely to be a monumental farce, if key institutional, constitutional and electoral reforms are not implemented urgently.

The country is about a year from holding fresh general elections with opposition political parties and civic organisations calling on government to level the electoral playing field. The status quo is said to be favour the ruling party, Zanu PF, which oversees electoral affairs.

“Our fear, as a coalition which represents over 150 organisations, is that unless key reforms are delivered, the 2018 elections will become a mere farce with the script being the same as that of the 2013 elections, with the apparent possibility of the actor being the same, the plot being distinctly familiar and the outcomes being a de javu moment,” said Dumisani Nkomo, Natioanal Spokesperson of the coalition.

Nkomo said there is no clear election roadmap, a situation that is likely to affect the credibility of the polls.

While welcoming the introduction of the Biometric Voter Registration (BVR) system, Nkomo said if not implemented properly, the system “can be a monumental disaster”.

He explained; “Having said this, we welcome the introduction of the biometric voter registration system with all its challenges. B.V.R can only work effectively if it is accompanied by a broader swathe of institutional reforms.

“It is our contention that barely 16 months before the election, there is no clear election roadmap. At best, there is neither a road nor a map.

“Since B.V.R captures physical and behavioural features such as fingerprints, the face, iris, signatures etc it can be used as a tool of intimidating people especially in rural areas to the effect that their voting patterns are being monitored.

“There must be sufficient time in educating and informing the voting public about B.V.R in order for it to be effective.”

Among other things, Nkomo said steps must be taken to ensure that the new voters roll produced after B.V.R is accessible to stakeholders and the voting public can check whether or not they are registered.

“The public media must be depoliticized and all parties must be given equal access to electronic and print media both public and private.

“The state broadcaster for example must not, as it has become the public relations arm of the ruling party. Section 155 of the Constitution speaks clearly about the imperative of fair access to the media.”