Doctor Who Stopped to Help Crash Victims ‘Hit By Truck’ 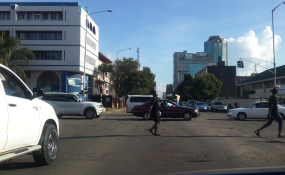 An off-duty doctor who stopped to help victims of a serious road accident in Zimbabwe was hit by a lorry and both his legs were broken, a press report says.

The doctor, named by the official Herald newspaper as Samuel Mvurume, is being treated in hospital in Harare.

Crowds had gathered in the aftermath of an accident involving a minibus near Chinhoyi in northern Zimbabwe at the weekend. The bus hit a tree and 23 people were injured, the paper said.

Mvurume got out to help the accident victims but was hit by a truck.

The Herald said: “It is suspected that the driver of the truck.. panicked after seeing hordes of people by the roadside.”

Zimbabweans complain that the heavy presence of police at fine-seeking roadblocks has done little to bring down the high incidence of traffic accidents in the country.

Earlier this month 15 people were killed near Bulawayo in a horrific accident blamed on a pothole. It’s estimated that five people die in road crashes in Zimbabwe daily.