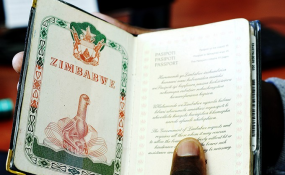 President Mugabe has said that Zimbabwe is the second most developed country in Africa. He actually did not say that; it was the continent’s second biggest economy. Of course, we all know that Nigeria and South Africa have to tussle to avoid that slot, but one of them always takes it anyway.

It is the development slot where the President said we are second. This columnist believes that the President was onto something here. Let’s see;

If development means that Zimbabwe is advanced and progressed, then the President was right. If development means that the people have a modern way of thinking, an advanced attitude and perspective, then Zimbabwe can measure up there. If it means having the infrastructural architecture in place for a differentiated economy, then the President is probably right.

But in our highly developed state in the African context, there are dinosaurian attitudes and views we have to disavow for us to be able to take our seat at the Top Table of two. One of them is the retrogressive thinking of one top civil servant to amend the Constitution to align it with his dogmatic aversion to modern immigration practices. It is the view that Zimbabwe should ban dual citizenship again. This is Trumpism packaged as super-patriotism. Zimbabwe should reject this type of archaic thinking with the contempt it deserves.

Contrary to what people think, in his address to the Zanu-PF caucus on May 10, 2017, our top civil servant did not centre on the Diaspora. The target of his intolerance is what he termed “300k foreigners on farms and mines”.

This of course refers to mainly people whose ancestors and parents came from neighbouring countries as immigrant labourers.

Most people of Malawian and Zambian heritage came to our country during the Federation (1953-1963). It is the same time that a lot of villagers also left arid communal lands in Masvingo and the Shurugwi and Zvishavane districts of the Midlands and settled in Zambia as farmers. They have formed the bedrock of the farming communities there. They are Zambians of Zimbabwean heritage. They mirror the foreign communities in Zimbabwe which have assimilated, but still retained aspects of their heritage. What is wrong with that?

With the advent of the Diasporan communities, Zimbabweans are now scattered everywhere and have their sub-communities in lands afar.

They have children there who for all intents and purposes are Zimbabweans. The pronunciation made by this top civil servant who is our long serving Registrar General (RG) comes with far reaching consequences for future generations from these communities. It betrays some very antiquated linear thinking and lack of consultation on his part. He either totally disregarded or overlooked the unintended consequences and collateral damage these views will have. For starters, who in the Diaspora has he spoken to?

Where is the consultation in this? Don’t you think if you are coming up with ideas that affect a people you need to speak to them? This top down approach to Diaspora engagement is one of the reasons why unlike Ethiopia, in Zimbabwe the Diaspora bond will remain a concept. What with such dinosaurian ideas coming out of our bureaucrats? At a time when there is an anti-immigrant movement and the rise of far right politics, progressive nations like Zimbabwe should show a pro-expatriate attitude.

It’s not like there is floodgate of immigrants seeking to settle in the country.

For the first time Zimbabwe launched a Diaspora Directorate in the Ministry of Macro-Economic Planning. This is a very positive development indeed. It showed consideration that the Diaspora should be seen as an opportunity. This directorate soon came up with a Diaspora Policy. The Diaspora embraced excerpts of this policy even though there were expressions of misgivings in that they had little to no input in it.

But it is still taken as a step in the right direction. It looked like we were getting somewhere. Then boom the RG has spoken. He wants to return the second most developed country back to the Stone Age.

The focus at the moment should be on delivering acceptable socio-economic outcomes for the people of Zimbabwe and not gerrymandering with citizenry.

Let’s focus on implementing our Constitution and national development programmes. And in that put our efforts in fostering economic ties with all groups of Zimbabweans regardless of their location. It is narrow thinking to disenfranchise millions of Zimbabweans and future generations on a whim or ideas frozen in the ’50s.

And this at the same time the same person is saying we should abandon birth control to boost our population! What confusing or confused self-contradiction.

Remember only a small pack of countries recognised dual citizenship in the 1950s. But the trend has seen more countries adopting this including recently, Mozambique, Angola, Zambia etc. This is progressive development. But should we have officials whose thinking is so outmoded then we have a problem. Africa now has about 40 countries out of 54 allowing dual citizenship. Does it make sense that the second most developed country in Africa would choose antiquated ideas?

Africa’s powerhouse Nigeria recognises dual nationality. There is no country with more citizens dispersed across the world like Nigeria. Maybe it is more modern than us after all. Expatriate communities are an opportunity, not threats.

We cannot subject future generations to these obsolete ideas. There is no link between a passport and loyalty. There is also no correlation between national security and citizenship. A fiend is a fiend regardless of their passport. There are population mobility bureaucrats charged with registering our populations that have to live with that. What next is he going to propose? The Constitution ushered in a new dispensation, a new constitutional order encapsulating the aspirations of our new nation. Dual citizenship is not some sort of political bigamy. It is a fact of population mobility. And this mobility can only increase.

It is also sad to note that the real target of the Registrar General’s dinosaurian move is actually not the Diasporans, but the immigrant communities which has been in Zimbabwe for generations. We are grappling with the ignorance of xenophobic attitudes adopted by some South Africans. Now we have our own top civil servants making equally time frozen toxic assertions against our fellow Zimbabweans with foreign heritage. No RG, you missed the progress boat. It sailed on. We are trying to build a modern day Zimbabwe where people live in the current time. We cannot surrender it to anachronistic views underpinned by yesteryear’s discredited dogmatism.

A threat to the immigration security of the Diaspora will lose the ruling party the goodwill of this constituency. And this constituency is getting financially more powerful. These ideas will only hand it over to the opposition on a silver platter. They will say, “thank you very much”. This is because if the opposition are to come across as the champions of Diasporan issues then it’s only logical for the Diaspora to align itself with them. There will be a high price to pay in the future. Maybe not immediately, but as certain as the sun rises from the east, if this idea is carried through there will be backlash.

The State in Zimbabwe is struggling to meet socio-economic needs of the population. The Diaspora is supplanting what would have been a serious burden on the State. Whoever looks after their families and vulnerable others by sending remittances is removing the burden from the State which has an obligation to deliver those social outcomes to the population. So the Diaspora is playing the role which could have been played by the Ministry of Labour and Social Welfare among many other ministries. This is because remittances are a poverty reduction instrument. Remember, the consumption of the remitted money is not an end in itself. There is a multiplier effect in the whole economy which plays a critical role in economic development of our country.

In short, Diaspora remittances are actually more developmental than consumptive as widely misconstrued. The people that remit that money should not be treated like some excess to requirement inconvenience. They should be treated like the critical stakeholders they are.

We can’t on one hand have a Diaspora institution like the Directorate and then promote archaic ideas which ostracise the very same people we are trying to work with. Isn’t that some kind of cognitive dissonance?

A vast majority of Zimbabweans who have acquired foreign passports did so because of pressure of circumstances and necessity. Not some shift in loyalty. Zimbabweans want their children to maintain strong linkages with the motherland. That is not much to ask. These linkages can only be perpetuated down the generations if the formal identity is not severed for some flimsy reason. And no insipid bureaucrat should be allowed to tamper with that. These are bonds and linkages that need consolidation and strengthening and disconnecting.

The Constitution is the embodiment of our value system. It is the fundamental principles that define our very being, our aspirations and our composite make up as a people. No political party or office bearer should ride roughshod with that sacred document. Even the First Citizen, the President, takes an oath to uphold it, not tamper with it. Every office bearer should also uphold it and not uproot it. After all we are the second most developed country in Africa. Let our actions vindicate that assertion.

Boycotts Will Not Change Court Decisions