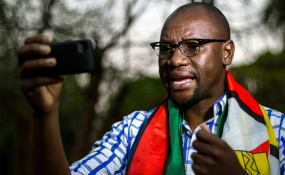 Zimbabwe clergy Evan Mawarire of #This Flag fame is coalescing social movements against President Robert Mugabe ahead of next year polls amid increasing calls for opposition leaders to swiftly bring to finality a grand coalition.

Elections are tentatively set for July 2018 but the country’s opposition parties are still dithering on concluding coalition talks despite the main opposition MDC led by Morgan Tsvangirai signing memorandum of agreements with other smaller parties, including Joice Mujuru’s National People’s Party and Welshman Ncube’s political formation.

With the opposition still to conclude coalition talks, Mawarire’s move this week on Tuesday to bring together social movements, among them Tajamuka, is seen as nudging Mugabe’s nemesis closer.

Sources in the opposition told News24 that there is “trepidation and suspicion” within the leaders of the main opposition following the pastor’s latest stance. The development is gaining currency, with weary citizens fed up with a fragmented opposition.

‘I don’t think everyone needs to join political parties’

“We (social movements) are together to say: Enough is enough,” said Mawaire, who last year earned the ire of Mugabe and Zanu-PF after a nationwide strike which brought the country to a standstill.

“The unprecedented mobilisation of Zimbabwe everywhere has begun,” he added.

Analysts told News24 that a coalition of activists as initiated by Mawarire blends well with aspirations of Tsvangirai and other opposition leaders ahead of 2018 polls.

Mugabe is seeking a fifth term at the ripe age of 94 and has been in power since independence from colonial Britain in 1980.

Coltart told News24: “I don’t think everyone needs to join political parties. If Pastor Evan can play a similar role to the one Archbishop Tutu and the UDF played in the final years of apartheid then they will perform a valuable role.”

Analysts, however, remain adamant that any effective strategy to dislodge Mugabe will inevitably have to be well co-ordinated and organised, adding that it should also be ideologically coherent in order to counter the confusing on Mugabe escape route.

“For Mawarire, the primary challenge will be to bring together real and organic social movements beyond social media. He needs to mobilise around dislocating Mugabe’s power base beyond state security that is snatching away the peasantry, labour, unemployed youth and the given population in urban areas through a programme that addresses their socio-economic quagmire.

“Anything shot of this is as futile as singing to the choir on social media and Mawarire has some homework to do in order to overcome this toll order,” said an official working for a foreign development agency, who preferred to remain anonymous for fear of being accused of funding social movements.

Thulani Mswelanto, a political analyst who doubles up as programmes manager at Crisis in Zimbabwe Coalition said any initiative to come up with a consolidated and co-ordinated framework for social movement is welcome, pointing out it would amplify the isolated voices.

“However there is need for extensive consultations among the various social movements and stakeholders so that there are no conflicting messaging. Most of these social movements operate on horizontal structures using committee systems and the proposed framework must then address the very genealogy of the movements and at what level they co-operate. Above all for the co-ordination to succeed there is need for consensus building and shared visioning,” said Mswelanto.

Bhekithemba Mhlanga, a political analyst based in the United Kingdom who left Zimbabwe more than a decade ago, weighed in saying it would be folly for opposition parties not to embrace the idea at a time everyone is fade up with the Zanu PF strongman.

“Zimbabwe needs fresh leadership, fresh ideas and fresh faces. The coalition of activists dispels the myth that political space is only for a chosen few,” said Mhlanga.

“No one has a monopoly to participate in politics in Zimbabwe.

“Those with the best prospects will win the hearts and minds of voters – established or new, young or old.”

Govt to Bail Out SMEs

The Reserve Bank of Zimbabwe (RBZ) is offering a monetary reward, in line with its …