Sir Reginald Stephen Garfield Todd (13 July 1908 – 13 October 2002) was a liberal Prime Minister of Southern Rhodesia from 1953 to 1958 and later became an opponent of white minority rule in Rhodesia.

Todd was born in Invercargill, New Zealand, in 1908. He was educated at Otago University, Glen Leith Theological College, and the University of the Witwatersrand. In 1932 he married Jean Grace Wilson, with whom he had three daughters.

Todd emigrated to Southern Rhodesia from New Zealand in 1934 as a Protestant missionary and ran the Dadaya New Zealand Churches of Christ Mission school. One of the primary-school teachers in his charge was Robert Mugabe. Though he had no formal medical training, Todd and his wife, Grace, set up a clinic where he delivered hundreds of babies and treated minor injuries.

From 1955 to 1960 Todd served as first vice-president of the World Convention of Churches of Christ.

Todd introduced modest reforms aimed at improving the education of the black majority by taking tax-money paid by Rhodesian property owners and appropriations from the British colonial authorities, and directing it toward black schools. His government introduced a plan to give elementary education to every African of school age. He doubled the number of primary schools and gave grants to missionary-run schools to introduce secondary school and pre-university courses for blacks.

He also introduced the appellation “Mr” for blacks instead of “AM” (“African Male”) and ended the prohibition on the sale of alcohol to black residents of the reserves, who were allowed to drink European beer and wine, though not spirits.

Todd pushed a bill through the Legislative Assembly, allowing for multiracial trade unions, thereby undercutting the growing white nationalist influence in the unions. Lastly, in a bid to increase the number of blacks eligible to vote from 2% to 16% of the electorate, he moved to lower property and education qualifications, but this was rejected.

In response, Todd’s ministers resigned en bloc, and following the appointment of a new cabinet, his party forced him out of power; three months later he was replaced as party leader and Prime Minister by Edgar Whitehead.

In a farewell statement, he said “We must make it possible for every individual to lead the good life, to win a place in the sun. We are in danger of becoming a race of fear-ridden neurotics – we who live in the finest country on Earth.”

Todd formed the new Central Africa Party which failed to win any seats in the election.

Out of power, Todd became increasingly critical of white minority rule and was an outspoken opponent of Ian Smith’s 1965 Unilateral Declaration of Independence from the United Kingdom. Todd applied for an exit visa to lead a teach-in at Edinburgh University to educate British public opinion on the inequities of white rule. The Rhodesian government banned his emigration, placing him under house arrest.

In 1972 Todd and his daughter, Judith, were imprisoned for a second time. After publicly backing Roman Catholic Robert Mugabe, in 1973 he had received a medal for his efforts in peace and justice from the Pope.

Judith Todd was ultimately forced into exile and became an “unperson” in Rhodesia when the media was banned from even mentioning her name. Todd himself was confined to his ranch near Bulawayo.

After helping to co-ordinate the isolation and embargo of Rhodesia, and especially after his support for legitimising guerrilla activity by black nationalists, Todd was widely condemned as a traitor by white Rhodesians. When the Smith Government was ultimately forced to give up power and the nation became the independent state of Zimbabwe in 1980, Todd was immediately considered for appointment to the new black government for his collaborating role. Lord Soames, following the recommendation of Prime Minister-elect Robert Mugabe, appointed Todd to the Senate of Zimbabwe on 8 April 1980, where Todd served until his retirement in 1985. After years of supporting Mugabe, Todd became disillusioned with the new regime due to its blatant violence against political opponents. He was knighted by Queen Elizabeth II in 1986, at the instigation of the New Zealand government.

During retirement, Todd donated 3,000 acres (12 km²) of his ranch to former guerillas who had been maimed in the Rhodesian Bush War. Nonetheless, Todd’s criticism of Mugabe intensified and in 2002 he was stripped of Zimbabwean nationality. He died, aged 94, on 13 October 2002, in Bulawayo. 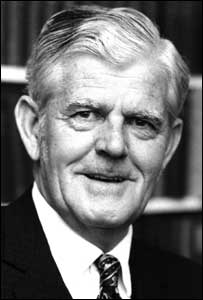