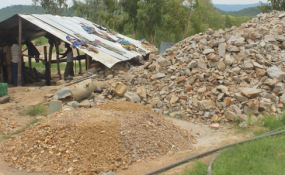 Records at the Mashonaland East commissioner of mines offices in Marondera show that the couple have been granted a licence to venture into mining in the gold rich Makaha area in Mudzi district.

“The province is blessed with the coming in of new players in gold production such as Mathias and Mildred (M&M) in Mudzi area,” a report by the mines ministry says.

“Equipment installed includes the crushing, screening, milling, CIP sections and elution. The plant can process more than 300 tonnes of ore per day. The construction stage was recently completed and the plant is now on commissioning stage,” the report says.

While the value of the project was not disclosed the ministry said hundreds of locals in the area would be employed at the mine. The M&M mine is part of three other gold mines that have recently been granted licences by the government to operate in Mudzi.

Mathias and his wife were once well-known across Zimbabwe from 2005 to 2009 for performing miracle healings where thousands of people attended their Pentecostal church for “healing and deliverance”.

However, their popularity fell after allegations surfaced that Mathias had shot dead a domestic worker after she saw a snake vomiting money at their Ruwa home. The couple was also accused of engaging in Satanism, allegations which they dismissed, as the work of their opponents.

The couple has also attempted to revive their preaching by rebranding their church as Rock Chapel Assembly based in Ruwa, but very few people have been attending the sermons.