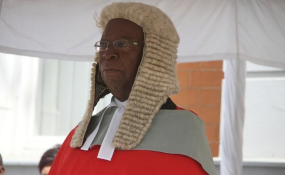 The “most important role” played by the late former Chief Justice Godfrey Chidyausiku was “shaping” the land grab exercise as he protected “us against whites”, President Robert Mugabe said Saturday.

Mugabe was speaking at the National Heroes Acre during the burial of Chidyausiku who succumbed to liver and kidney complications in South Africa on May 3 at the age of 70.

According to Mugabe, Chidyausiku was a “faithful servant” who “never went astray” in protecting the government on land issues.

He said, “Go well son of the soil, faithful servant who never deceived the nation… .and you never went astray, go well as a national hero and may your soul rest in eternal peace..”

“A hero in the Judiciary who protected us in the land issue against the whites as we were taken to Courts to prevent us from getting back our land.”

“Chidyausiku’s exploits as Chief Justice saw him scooping most of the grandeur of Zimbabwe Land Reform programme fighting to protect the Zimbabwean right to own and control their land and in the process making him a real jurist of the Third Chimurenga,” added Mugabe.

“We are grateful for the man who fought for our land and also fought against colonial injustices,” said Mugabe.

He added, “The most important role played by the late former chief justice was shaping the land reform programme.”

There was no end to the eulogy, “White Judges turned a blind eye to the plight of Africans, so we depended on people like the late Chidyausiku. He will be remembered most in shaping the course of the land reform programme in the Third Chimurenga that we embarked on and you all know it.”

Mugabe’s eulogy will have come as no surprise after he appointed Chidyausiku the Chief Justice at the height of the land grab exercise following the removal of Justice Anthony Gubbay from office.

Gubbay was forcefully removed from the Chief Justice position after then justice minister Patrick Chinamasa and the war veterans led a virulent campaign against him for saying the white farmers stood to win in courts if their land was taken from them without compensation.

According to his brother, ambassador Boniface Chidyausiku, the late former Chief Justice was a “passionate” farmer himself who ran a successful farm in Goromonzi where 150 tonnes of tobacco were harvested this season with 150 hectares under maize crop yet be harvested.

“This explains why he (Godfrey) was so passionate about the return of the land to black Zimbabweans,” said Boniface.

The action, it was strongly felt, betrayed his impartiality and independence as the head of one of the arms of the State.

In 2013, Chidyausiku also ruled in favour of Jealous Mawarire, then a less known Zimbabwean man who wanted polls to be held against opposition resistance which cited the absence of poll reforms.

But in January this year, Chidyausiku said he was going to leave office “a happy man” and had no regrets about the judgements he handed down which saw white farmers losing their land.

He, however, admitted that his stance on the land issue had divided the bench.