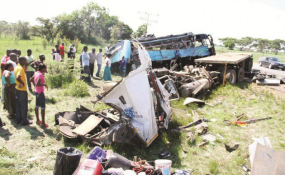 Some of the accidents between Harare-Beitbridge highway.

Christopher Charamba Features Correspondent On Wednesday evening, yet another tragedy struck the country. A South African-bound bus was sideswiped by a haulage truck along the Harare-Beitbridge Highway and caught fire at Nyamatikiti River near Chaka Shopping Centre in the Midlands Province.

At least 30 passengers were feared dead in the crash with most of the victims burnt beyond recognition.

The bus, reportedly, had over 60 passengers on board, while the truck was transporting tyres.

This is not the first accident to occur on the Harare-Beitbridge Highway.

Among the several accidents recorded along the highway, 19 people died in July 2014 after a road accident involving a commuter omnibus and a truck.

Police spokesperson Chief Superintendent Paul Nyathi said at that time they were “concerned with the narrowness of the Masvingo-Beitbridge Road and appeal to drivers to exercise caution on this road.”

Last year in March 2016, three people perished on the spot while 29 others were injured, after a South Africa-bound bus veered off the road and overturned along the Masvingo-Beitbridge Road.

The following month, 12 people were killed, while 45 others were injured when an MB Transport bus collided head-on with a haulage truck 45km outside Beitbridge.

After the accident, Transport and Infrastructural Development Minister Joram Gumbo appealed to drivers, especially those of public service vehicles, and other road users to exercise caution when travelling during the night and early hours of the morning.

Last month, 14 people who were on their way to a funeral died in a road traffic accident where a haulage truck collided with the commuter omnibus they were travelling on.

In her statement, national politice spokesperson Senior Assistant Commissioner Charity Charamba said: “Due to the state of our roads, the ZRP is appealing to motorists to avoid travelling at night and observe speed limits to preserve life.”

She added: “As police, we are quite saddened by the unnecessary loss of lives in situations which we could be avoided. Let’s all preserve the sanctity of human life.”

The state of Zimbabwean roads has been a major talking point where road accidents are concerned.

However, more work needs to be done to improve the quality of national roads, particularly, major highways that have a heavy flow of traffic.

The dualisation of the Harare-Masvingo-Beitbridge Highway is one project that would go a long way in improving the quality of that busy traffic artery.

However, the project which has been on the cards since 2002 is yet to take off though Government has insisted that its launch is imminent.

The project initially stagnated for 12 years between 2002 and 2014 because ZimHighways, awarded the tender in 2002, allegedly struggled to secure funding.

Things have since changed as Government awarded the tender for the dualisation project to Geiger International in association with the China Habour Engineering Company Limited.

An inter-ministerial committee also met with the financiers of the project to finalise implementation modalities.

Minister Gumbo, told a parliamentary portfolio committee in February that an independent contractor would supervise the project to avoid the country being short-changed by poor workmanship, like what happened on the Plumtree-Harare-Mutare Road rehabilitation project.

“We are hoping that His Excellency is going to do the ground-breaking ceremony, which will trigger commencement of construction of this road,” said Dr Gumbo.

“The spot where the ground-breaking ceremony is going to take place has already been identified. The engineers from Geiger International and their contracted company, some of them are already in the country.

“Things are moving. Before you go for Independence, work will have started. That is the timeline that I can give you.”

The importance of this highway project cannot be overstated as it will ensure smoother flow of traffic and reduce the risk of accidents.

Potholes, poorly lit roads with no clear marking as well as stray animals all pose a major risk to motorists particularly those travelling long distances and at night.

Government should therefore expedite the dualisation of the Harare – Beitbridge highway.

This road is a major corridor for the transportation of goods and people and has significant economic status to country.

It is, therefore, imperative that the safety of motorists and passengers be of the utmost importance and constructing a better road will help to achieve this.

In its construction, the contractors should also look at fencing the side of the roads, particularly, in areas where animals are found as they too pose a risk to motorists.

Further delays in beginning this project will has a negative effect to the lives that are lost when accidents occur.

While work on the highway needs to take place immediately, motorists, particularly those who ferry passengers should exercise extreme caution because of the poor state roads.

The loss of life can be avoided in many instances if those in control of the vehicles prepare themselves for the risks and drive responsibly. Motorists should avoid speeding and avoid travelling late at night.

In relation to road traffic accidents, there is also need for a comprehensive Road Accident Fund to assist victims of such tragic events.

Government, last year, stated efforts to introduce such a fund were taking shape as they engaged regional teams to carefully work on policies aimed at assisting victims of road carnage.

Minister Gumbo, said in-depth research was a necessity before the introduction of the accident fund.

“We are working on structures towards the achievement of the fund and so far we have been relying on regional feedback through case studies and visits so that we come up with something that is well researched and well organised,” he said.

“We are working towards coming up with a policy that would have been properly researched to avoid any shortfalls. I agree that we may be legging behind on the process, but we can assure the nation that the fund will soon be finalised.”

Minister Gumbo added third party insurance was one avenue to compensate road accident victims, but had not helped matters as it was exacerbated by the proliferation of fake insurance policies.

He said third party insurance was being administered privately by insurance companies hence his ministry could not comment substantively on the actual amount being collected periodically.

“In other countries, third party insurance was administered by Government, but in Zimbabwe’s case, there had been reliance on insurance companies as agents since the colonial era.”

In Zimbabwe, the Road Traffic Act in Section 38B (1) compels drivers of passenger public vehicles to get a policy of insurance providing a benefit to every person who suffers a loss or injury in an accident.

Section 38 (1) (a) of the same Act provides for $2 000 compensation in case of death of or permanent injury of the victim.

The Act, in sub-section (1) (a) further provides for the payment of $350 for medical and funeral expenses in case of injuries or death respectively.

The law also provides, in Section 38C, which limits liability in respect of children and small claims, for $200 compensation for death or permanent disability for a child of six years or below and $300 for a 14-year-old or below.

The child who gets $300 should however be older than six years.

A driver found in the above is liable to imprisonment of at least one or a fine which would be determined by the courts.

The Road Traffic Act in Section 38D requires a driver of a passenger service vehicle to ensure that proof of insurance is displayed on the windscreen and failure to display it would be fined or jailed for up to three months.