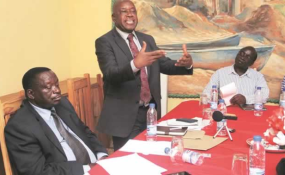 THOUSANDS of people braved the scorching sun to bid farewell to one of the country’s gallant sons, Brigadier-General James Jotham Murozvi, who was buried at the National Heroes Acre yesterday.

The national hero, whose Chimurenga name was Cde Tichatonga, collapsed outside his house in The Grange on April 6 and was pronounced dead on arrival at West End Hospital.

President Mugabe led mourners who included Cabinet ministers in body viewing at Stodart Hall in Mbare early in the morning.

Brig-Gen Murozvi was described as a gallant son of the nation, loving husband, father, selfless, hardworking, humble and a friendly grandfather.

Mourners said he had the nation at heart right from the liberation struggle till his demise last week.

Banners on display at the national shrine told the story of selfless service.

Some of the banners were inscribed “Cde Murozvi, a gallant fighter”, “Zim-Asset, None but through ourselves”, “Command Agriculture – sign up for winter wheat 2017 production”, “Upfumi kuvatema”, “A political gun is the best friend to oppressed people”.

Musical groups, others resplendent in Zanu-PF regalia and others in blue T/shirts donated by Doves Funeral Parlour, entertained mourners.

Not to be outdone were youths on the terraces, who, despite the heavy presence of dance groups, continued beating drums, singing and dancing.

The police drummers were outstanding and thrilled the mourners.

The procession started early in the morning at Stodart Hall in Mbare.

People lined the streets of Mbare as early as 8am, singing revolutionary songs as they jostled to catch a glimpse of the funeral procession.

The casket, which was on a gun carriage, was draped in the national flag.

The crowd, that included the elderly and the young, was entertained by Mbare Chimurenga Choir and youths at Stodart Hall, who sang and danced to revolutionary songs.

The gun carriage carrying the late Brig Gen Murozvi’s body was accompanied by close relatives and friends, followed by ministers and other dignitaries.

After body viewing, the body then left for its final resting place at the National Heroes Acre.

First to give a speech at the National Shrine was family spokesperson Dr Augustine Mazvuru.

He described the national hero as a loving man who cared, not only for his immediate family, but the entire clan, as he accommodated needy relatives who came to Harare on various missions at his Waterfalls home.

“A few months after getting married to Joyce (Retired Group Captain), they turned their Waterfalls house into a sanctuary for the extended family,” said Dr Muzvuru.

“Their home was a transit point for relatives coming to the city looking for opportunities in Harare. James touched the hearts of many and he would do his best to assist relatives.”

Dr Mazvuru said the late national hero encouraged many people to pursue their dreams and encouraged his wife to further her studies to Masters Degree.

“He also provided for other members of the community,” he said. “After a tour of duty outside the country, James brought five tonnes of textbooks for donations to schools in his home district in Bikita.

“We are happy as a family that he has been accorded the status of a national hero. We pay tribute to President Mugabe for this honour.”

Minister of Welfare Services for War Veterans, War Collaborators, Ex-Political Detainees and Restrictees Cde Tshinga Dube, said Brig Gen Murozvi was a dedicated man, whose love was not only for his family, as he worked hard for the development of the country until his demise.

“This man gave his life for the liberation of our country and he worked so hard to build the Defence Forces that we are proud of today,” he said. “He has also been posted to various missions as a defence attaché in other countries.

“He was now working under me in our Ministry and worked hard for the good welfare of war veterans and worked well with many people. This is the reason why many people have come for this huge send off.”

Zanu-PF youth leader, Cde Kudzanai Chipanga, said the death of Brig Gen Murozvi was a huge loss, not only to his immediate family, but to the nation.

“It’s not only a loss to his family, but also to Zanu-PF youths,” he said. “He is a testimony that we should work for the development of the nation. The youths can learn a lot from such hard working cadres.

“We can look up to him as a good example.”

The late national hero was born on June 1956 in the Mazungunye area in Bikita.

He attended Marozva and Pamushana Primary Schools in the district.

He later pursued his secondary education up to Form 4 at Nyatsime College in Harare.

After completing his Form 4, he enrolled for a teacher training programme in secondary education at a training college in Gweru.

In September 1975, he joined other young men and women in sneaking into Mozambique through the Mount Selinda area in the eastern border to join the Zimbabwe African National Liberation Army (ZANLA).

While in Mozambique, Brig Gen Murozvi played an instrumental role in the education department, applying the rudimentary skills he had acquired in the aborted teacher training programme to educate the young children of school going age, who were crossing the border in their thousands daily.

In 1976, he was selected to undergo military training at Takawira 2 in Chimoio, Mozambique, where he exhibited great potential, determination, courage and aptitude in military matters.

This saw him being selected in early December 1976 to go for further training in Tanzania, at Nachingueya Training Camp, as part of the 5 000-strong Songa Mbeli (Advance) Group.

His group sailed to Tanzania from Mozambique on the famous navy ship called Mapinduzi.

He played a pivotal role in the liberation struggle in various capacities before returning home at independence in 1980.

After independence, Brig Gen Murozvi rose through the ranks and held several positions in the army before being posted to the Ministry responsible for ex-freedom fighters.

At the time of his death, Brig Gen Murozvi was principal director responsible for welfare in the Ministry of Welfare Services for War Veterans, War Collaborators, Ex-Political Detainees and Restrictees.