It is said about people with albinism in East Africa that when they die, they simply disappear. After all, the logic of the superstition goes, have you ever been to an albino’s funeral?

White-skinned babies born to black parents, people with the condition are teasingly referred to either as “mzungu”, meaning white man, or the more sinister “zeru” – Swahili for ghost.

When Isaac Mwaura became Kenya’s first and thus far only albino MP, it was a major landmark for those in the country who, like him, have a congenital disorder affecting the production of melanin, the pigment that colours the skin, hair and eyes.

Albinism is often accompanied by poor eyesight, and the lack of natural protection from the sun means it also brings a high risk of skin cancer.

But thanks to the superstitions built up over generations to the profit of rural witch doctors, people with the condition also risk being snatched from their homes and carved up for their body parts.

Peddlers of witchcraft say the leg of an albino can be used to detect precious metals for mining, that the hand of an albino will bring fishermen greater catches. On this darkest of black markets, it is reported that the full body of a person with albinism can be sold for up to $75,000 (£50,000).

Ritual killings “remain a challenge” to this day across the region, Mr Mwaura tells The Independent in an interview at his home.

“In this house we have two little children, Gabriel and Bianca, who would have been killed for ritual purposes if we had not taken them in,” he says.

“The threat is there. Bianca’s mother disappeared, we don’t know where she went, and it was the father who was actually the one who wanted to sacrifice her.”

Many with albinism grow up in broken homes, making all the more difficult the challenges of dealing with the prejudice and discrimination that come from being so visibly different at a young age.

Mr Mwaura’s story is no different. “When I was born, my parents were separated because of me,” he says, with no emotion. “My father said very nasty things to my mother, that I was not his child. He believed she had conceived me from somebody of caucasian or asian origin.”

Mr Mwaura was nominated for parliament by the opposition ODM party in 2013, when he was just 31 years old, to represent and advocate for marginalised communities.

But his career in politics can be traced back to his decision, back in 2006, to help set up the Albinism Society of Kenya – that, and his friendship with an unknown actress by the name of Lupita Nyong’o.

He met the now Oscar-winning star after her mother became a supporter of the society, and Nyong’o produced and directed a film about living with albinism in 2009 called In My Genes.

Nyong’o’s father, Peter Anyang Nyong’o, “was a former minister,” Mr Mwaura says. “This was a guy I used to look up to, even before I knew I could meet him. So I met him through the daughter, and that’s how I was able to join a political party.”

In 2013, Mr Mwaura was made an MP after working his way up through the party’s ranks. That same year, 12 Years a Slave made Nyong’o an international star.

“We had been very good friends, and we both achieved our dreams together,” he says. “I remember one day I was looking at the newspapers – she was on the front page and I was on the back page. I can say we walked this journey together.”

It is unquestionable that becoming an MP has changed Mr Mwaura’s life in a material sense. Though he lives just 20 minutes from the house where he grew up in Ruiru County outside the capital Nairobi, he has swapped the rural backdrop of his home with his single mother for a sprawling residence with servants and its own electric fence in a prestigious gated community.

But the prejudice and superstition about his albinism are still there – even in the smallest details.

In Kenya’s western Vihiga County, a 56-year-old man named Enoch was killed last year by a gang of three men who sliced off his fingers, his left ear and a part of his neck before fleeing, leaving him for dead.

But Mr Mwaura says the country has still “more progress” compared to the likes of Uganda, Malawi or Tanzania.

“I feel it when I travel to those countries and I see how they treat people with albinism, even on a cultural level, I can tell that we have made some progress.”

Speaking to The Independentfrom Kampala, the head of the African Albino Foundation of Uganda (AAFU) Olive Namutebi says life is “still dangerous” for people with albinism in that country.

She says that albinos are marginalised from an early age and tend to struggle in school as a result, leading to a perception that people with albinism are stupid. She describes her own time in school as “hard… especially with kids following me down the road shouting ‘mzungu’, meaning white”.

“Not much advocacy has penetrated through to change society beliefs,” she says. Asked if people still get snatched for sacrifices she says: “Yes, they do get kidnapped. Many incidents are not fully documented. It makes me want to be more determined, to save any life I can.”

Ms Namutebi says Kenya may be better for albinos than Uganda, but Tanzania is “surely far worse”. Numbering at around 30,000, Tanzania’s albino community is believed to be the largest in Africa, and at least 80 individuals are reported to have been killed since 2000 for their body parts.

Tanzanian journalist Vicky Ntetema, who won an award for a series of undercover investigations of witch doctors in 2010, has set up a charity which aims to respond to calls for help from albinos fearing for their lives. 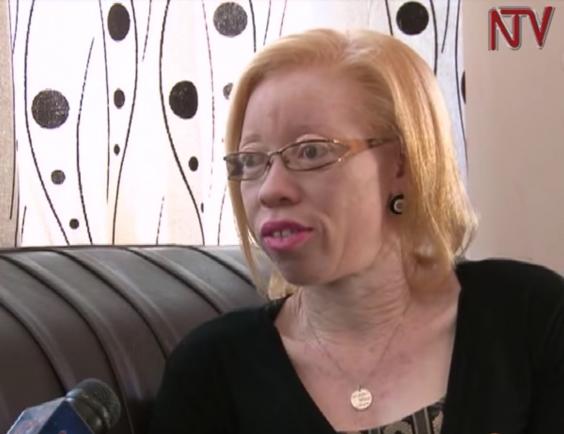 Olive Namutebi works to champion the rights of people with albinism, and has been interviewed in the past by NTV Uganda (NTV)

She told Deutsche Welle’s WorldLink programme earlier this month that it is often women who need help.

“Witch doctors tell their clients that if you rape a woman with albinism you will be healed of your illnesses, especially HIV and Aids,” she said. Seeing these kinds of attacks led her to think “something has to be done”.

In his living room, Mr Mwaura has a given pride of place to a series of photographs from his wedding day last year. They are not just of the beaming bride and groom, but of the pair’s surprise meeting immediately after the ceremony with President Uhuru Kenyatta at State House.

Reported widely at the time in Kenyan media, it is just one of many incidents that have raised the MP’s public profile and, in doing so, increased awareness of people with albinism throughout the country.

The Albinism Society of Kenya is working to distribute sunscreen, visiting schools, counselling parents and putting on events like the Mr and Mrs Albinism beauty pageant which proved such a success earlier this year.

But it is Mr Mwaura’s image that has the power to reach out to all corners of Kenya and make people with albinism realise they are not alone. 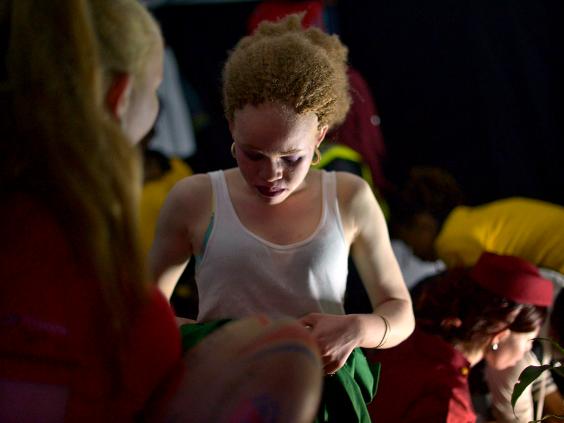 “I have young boys who tell me, ‘I am even called your name in the village – Mwaura’, that it has become like their second name. Girls tell me they are asked if they are my sisters.

“Being in the public domain may not change everything but it really helps, to change those perceptions.”

Mr Mwaura’s heavily pregnant wife Mukami told The Independent she lost friends when she started dating him – the ones who “said things behind my back”.

“At first it was strange to get looks from people, with everyone staring and wondering what we were doing. It would attract attention when we went to a public place. For me that was a bit off, to begin with. But as you get used to it you become oblivious of the other people.”

She says her family were more concerned with his being a politician, though, and it helped that she and others had seen him before on TV.

Thanks to the way albinism is passed on genetically, and the fact it does not appear to run in Mukami’s family, it is unlikely that their children will have the condition.

They will be carriers, however, and if they meet another carrier any grandchildren would have a strong chance of being born with albinism.

“We are working now to create a better world for our grandchildren.”