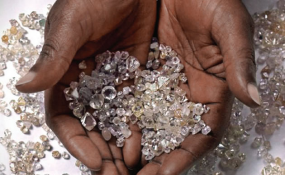 Three court orders have been handed down against ZCDC, but the company has ignored them, while extracting diamond ore at the disputed mine. Grandwell has 50% shareholding in Mbada Diamonds.

The company has been contesting the decision by government to take over its mining operations after it failed to renew its mining licence in 2015 over its resistance to join the consolidated company. The latest court order was issued on April 26 baring the ZCDC from taking Mbada’s diamond ore. The court order warns the ZCDC that it risks being denied audience before the High Court, while any papers filled by then shall be struck off the record if the company ignores the court order.

In a letter to ZCDC chief executive Morris Mpofu, also copied to Mines permanent secretary Francis Gudyanga and board member David Murangari, Grandwell Holdings lawyers, Scanlen & Holderness said it was illegal for the company to continuously disobey the court orders.

It reads in part: “As you are no doubt aware, three High Court orders have been made at the instance of Grandwell Holdings (Pvt) Ltd interdicting Zimbabwe Consolidated Diamond Company (Pvt) Ltd from collecting diamond ore or diamonds from Mbada Diamonds (Pvt) Ltd’s concession area or accessing the area secured by security personnel of Mbada Diamonds (Pvt) Ltd or otherwise interfering in any manner with the security arrangements in relation to the area.”

Grandwell lawyers accused the ZCDC and the Zimbabwe Republic Police of barring Mbada Diamonds’ security officers from accessing to the concession. They said the ZCDC’s actions are in contempt of court. “Entirely without prejudice to legal action against you in your personal capacity in respect of acts of contempt of court and the loss already suffered by Grandwell Holdings (Pvt) Ltd and Mbada Diamonds (Pvt) Ltd, we are instructed to demand, as we hereby do, immediate stoppage of the wrongful and criminal contempt referred to above,” said the lawyers.

Zimbabwe’s real gross domestic product (GDP) is projected to contract by between 7,5% and 8,5% …