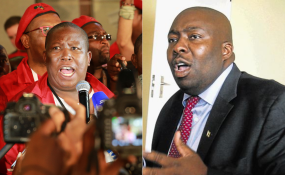 Zimbabwean President Robert Mugabe’s top aide and government minister has shrugged off charges he is working in cohorts with the Economic Freedom Fighters (EFF) leader Julius Malema to topple the Zanu-PF strongman.

State media on Sunday alleged that Saviour Kasukuwere, the Zanu-PF political commissar, who doubled as the local government minister, was plotting with Malema to stage a coup against Mugabe, 93.

Mugabe was currently battling factionalism within the ruling party, as the race to succeed him got murky.

The Sunday Mail, the largest circulating state-owned newspaper, claimed that Kasukuwere and Malema had the backing of a British agent named Lord Robin Renwick. It said that Renwick was the architect of the short-lived administration of Bishop Able Muzorewa in 1978.

Renwick, the paper added, was the United Kingdom ambassador to South Africa during apartheid.

The report quoted one of Mugabe’s provincial ministers Martin Dinha.

“During the meeting convened by Advocate Jacob Mudeda, I submitted the allegation that Cde Kasukuwere is working with Julius Malema because they both share the ambition to take over from power from presidents Mugabe and [Jacob] Zuma,” Dinha told The Sunday Mail, further chronicling how Kasukuwere facilitated Malema’s visit to Zimbabwe in 2010.

“…Kasukuwere and Malema see themselves in the same light. They want to run with the idea that the youth are the leaders of tomorrow and tomorrow is today…,” Dinha said.

But Kasukuwere, who was under fire from a camp which wanted Vice President Emmerson Mnangagwa to take over from Mugabe and pushing for the veteran leader to axe him, told News24 the allegations were patently false.

“It’s nonsense uttered by a deranged mind,” Kasukuwere said, adding that Dinha was grasping at straws.

“He is helplessly desperate. Someone needs medical help.”

Last week Kasukuwere filed a $1m lawsuit against Dinha and the state media over allegations he was intent on overthrowing Mugabe.

Kasukuwere hinted on Monday that he would institute another legal action over the latest allegations.

“See you in court. He who alleges must prove,” said Kasukuwere.

Efforts to get a comment from the EFF were unsuccessful.