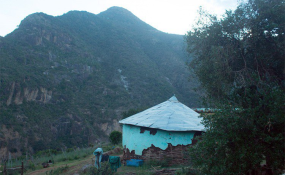 In February, during his reply to the State of the Nation debate, Zuma insisted that the land would be returned to the people. He also maintained at the time that the calls for land restitution had nothing to do with hatred of whites.

“It does not display hatred. Responsible leadership must find a way to avoid that situation, so I don’t think it helps to jump into phrases that if somebody talks about land hunger, then he is hating the whites,” Zuma was quoted as saying at the time.

But Mzembi warned: “Do not carbon copy our revolution, evolve your own model. Land was the bedrock of our struggle. It is a less emotive issue [in South Africa] than in Zimbabwe,” Mzembi was quoted as saying.

“I get the sense that our neighbours are a little bit more business driven. Black business economic empowerment has been more important and more successful [in South Africa].”

Mzembi chaired the parliamentary agriculture, lands and resettlement before becoming the minister of tourism in 2009.

He said that although there could be pressure for land reform in South Africa, it was important for the Zuma administration to be wary of the “dire consequences” that could come with the move.

At the time, Mugabe said the reforms were meant to correct colonial land ownership imbalances.

At least 4 000 white commercial farmers were evicted from their farms.

The land seizures were often violent, claiming the lives of several white farmers during clashes with veterans of Zimbabwe’s 1970s liberation struggle.

Critics of the reforms blamed the programme for low production on the farms as the majority of the beneficiaries lacked the means and skills to work the land.

Land reform has been high on agenda on the ANC agenda since Nelson Mandela led the party to a historic victory at the country’s first democratic election in 1994. The aim has always been to redress the nation’s social economic imbalances.