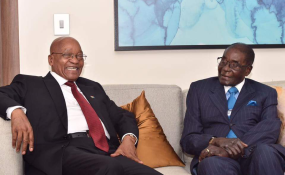 Former Zimbabwean finance minister Tendai Biti says President Robert Mugabe, 93, is suffering from old age after the nonagenarian suggested his country was the second highly developed nation in the continent.

Mugabe told the World Economic Forum on Africa on Thursday that Zimbabwe was the most highly developed country in Africa after South Africa, pointing out that the country had universities and the highest literacy rate on the continent at 90%.

His remarks, however, sparked outrage and ridicule worldwide, with Biti, who served as Mugabe’s finance during the government of national unity between 2009 and 2013, telling News24 Mugabe was “mad”.

“The suggestion that Zimbabwe is Africa’s second economy is pathological and reflective of exhaustion, cognitive dissonance and dementia,” said Biti.

‘Mugabe needs to wake up’

Reports indicated that an estimated three million Zimbabweans were economic refugees due to Mugabe’s failed policies.

Economist and banker, Bhekithemba Mhlanga pointing out that that most people thought of fragile states in terms of countries such as Somalia a few years ago – but Zimbabwe was now a caricature of a similar state by most comparisons.

“… When you have a situation where the country has no currency of its own, faces massive liquidity crisis, unemployment at 90% and cannot provide effective health care – then it is a failed state, especially given that it once had all this in place,” said Mhlanga.

Mhlanga stressed that the fragility of Zimbabwe stemmed from two major sources – weak economic fundamentals and the opaque succession politics.

“Anyone who says otherwise is simply floating in the sphere of the angels – they are dreaming. Mugabe needs to wake up and smell the chaos,” said the banker.

Thulani Mswelanto, the programmes manager at Crisis in Zimbabwe Coalition, concurred, saying the country was indeed a “fragile state”.

“It is a low-income country characterised by weak state capacity and/or weak state legitimacy leaving citizens vulnerable to a range of shocks. The dearth in economic life and a highly contested political legitimacy of the state following a series of contested elections confirm that we are a failed state,” said Mswelanto.

However, Ernest Mudzengi, another political analyst and director of the Media Centre in Harare, said describing Zimbabwe as a fragile state was rather “too harsh” and taking issues too far.

“We still have things that are functional unlike in the former Somalia so we can’t say Zimbabwe is a fragile state but a failed state yes. There is a world of difference between a fragile and failed state. Sure yes, a failed state we are,” said Mudzengi.

By Tadious Manyepo BOXER Tinashe “Chairman” Madziwana says he will not lose hope, after his …