Nicholas Mukomberanwa (1940 – 12 November 2002) was a Zimbabwean sculptor and art teacher. He was among the most famous products of the Workshop School at the National Gallery of Zimbabwe and an art mentor and teacher to the Mukomberanwa Family of sculptors. His work has been exhibited in galleries around the world and he remains one of Zimbabwe’s most famous artists.

Mukomberanwa was born in the Buhera District of the Manicaland Province in 1940. He was named Obert Matafi, first-born son of his father Marakia’s second wife Chihute, who died when Obert was two years old. From then on he was brought up by Marakia’s first wife Maiguru. In 1958 at the St Benedicts Mission, Obert was baptised Nicholas and took the surname Mukomberanwa in honour of an ancestor.

Nicholas attended Zvishavani Primary School while his father worked at the nearby King Asbestos Mines. Art was not taught at school but by the time he was 15 Nicholas had produced his first sculpture in clay. By the age of 17 he was accepted at St Benedicts Mission, Chiendambuya, where he was recognised as skilled in painting and drawing and so was encouraged to move to the Serima Mission, Masvingo Province. There, Father Groeber encouraged sculpting and the craft of woodcarving and Nicholas encountered a blend of traditional Christian iconography and tribal African pieces.

Mukomberanwa was heavily influenced by the drawing, patterning, and carving lessons he learned from Groeber and the school’s art teacher Cornelius Manguma. Mukomberanwa produced his first art works while at the school, producing six carvings for the Serima church. These include four cement angels in the tower, as well as two wood angels for the chapel. 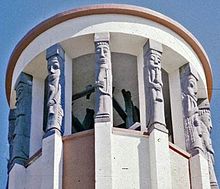 However, after a productive year at Serima, Mukomberanwa was expelled and moved to Salisbury (now Harare), taking a job as an officer in the British South Africa Police, where he remained for 15 years (1962–76). Even though his year at Serima was brief, his style was decisively shaped by his experiences there. His work was typically architectural, carved on only one side. Additionally, in his later geometric phases, he relied heavily on patterning learned at Serima.

Nicholas was still drawing for recreation and in 1962 he met Frank McEwen, then director of the National Gallery of Rhodesia (today the National Gallery of Zimbabwe), who encouraged him to take up stone carving. McEwen provided materials and training in a workshop in the Gallery basement, and soon Mukomberanwa was sculpting in his free time, producing his first stone piece The Thief. Thanks to McEwen, the “first generation” of new Shona sculptors were given international exposure despite the sanctions being imposed on Southern Rhodesia in the period 1965-1980 and Nicholas’s work joined that from other leading members from the Workshop School such as Sylvester Mubayi, Joram Mariga and Joseph Ndandarika. Early works by many of the first generation artists, including three by Nicolas, are now in the McEwen bequest to the British Museum.

International exhibitions, in which Nicholas’s sculptures were included, up until Frank McEwen’s resignation as museum director in 1973, are listed below.

During its early years of growth, the nascent “Shona sculpture movement” was described as an art renaissance, an art phenomenon and a miracle. Critics and collectors could not understand how an art genre had developed with such vigour, spontaneity and originality in an area of Africa which had none of the great sculptural heritage of West Africa and had previously been described in terms of the visual arts as artistically barren.

Mukomberanwa married his first wife, Grace, in 1965 and they had eight children. Eventually, in a risky move, he decided to end his career with the police to become a sculptor full-time. The gambit paid off, and by the late 1970s and in the 1980s his work was being shown in many venues. He continued to hone his skills over the following decade, developing one of the most distinctive personal styles found in his generation of Zimbabwean stone sculptors.

“Mukomberanwa’s sculpture is full of ideas and inventions, he has a great variety of attitudes and expressions and he likes to portray whole clusters of intertwined figures. He works in many different stones, continuously using textures and colours. The mood of his sculptures is always meditative, sometimes religious, and they are of a very high quality.”

In 1969, Frank McEwen’s wife Mary (née McFadden) established Vukutu, a sculptural farm near Inyanga, and in 1970 McEwen arranged for Nicholas to have a sabbatical from the police and spend 6 months there working on large pieces of black Penhalonga serpentine that would form part of the Musée Rodin exhibition.

In 1976, Nicholas resigned from the police to become a professional sculptor and by 1977 had a sold-out show of works at the Goodman Gallery in Johannesburg. In 1978, he arranged to buy a farm near Ruwa from Roy Guthrie, founder of the Chapungu Sculpture Park, and it was there that he settled with his wives (he had married his second wife Betty in 1976) and family. Using his earnings from his works, Mukomberanwa invested in farmland and was considered by many to be one of the ablest farmers in Zimbabwe. As his agricultural holdings expanded, he increasingly relied on his family members to complete laborious sculpting tasks, such as polishing.

Nicholas Mukomberanwa on his farm with a typically successful maize crop

One of Nicholas’s works, called The Chief, was depicted on a Zimbabwean stamp issued to commemorate Commonwealth Day on 14 March 1983. It formed the $1 value in a set completed with works by Henry Munyaradzi, Joseph Ndandarika and John Takawira.

In 1986 Prime Minister, Robert Mugabe, bestowed on Nicholas a special award for his contribution to the visual arts in Zimbabwe, while in 1989 Nicholas was the overall winner in the annual Nedlaw / Baringa exhibition at the National Gallery of Zimbabwe for his piece “Street Beggar” and was chosen with Tapfuma Gutsa and Henry Munyaradzi to represent Zimbabwe in the New York exhibition “Contemporary African Artists – Changing Tradition”.

In June–July 1993, Nicholas was joined by his four sons Anderson (born 1968), Malachia (born 1970), Tendai (born 1974) and Lawrence (born 1976) in presenting an exhibition of their sculpture at the Chapungu Sculpture Park, Harare.

By the end of the millennium, Mukomberanwa’s reputation was further enhanced by the many exhibitions in which his work was displayed. Some of these are listed below. Later in his career, he slowed his production of art to enjoy farming and cattle ranching on the Ruwa farm. He produced less, creating more personal sculptures and slowing down the pace of his life considerably.

Mukomberanwa’s sculptures showed human forms at various levels of abstraction and sometimes depicted animals, birds or spiritual feelings; most were highly polished, although in a few cases he would contrast smooth sections with areas of great roughness. He worked primarily in hard stone, using local materials such as opal stone, cobalt stone and other serpentines, especially a local variant called springstone found at Tengenenge.

“Unlike many other sculptors, Mukomberanwa speaks from personal experience rather than recounting what he has heard or been told. To him beliefs must be personally held rather than customarily observed. Over the years, his work has shown a sense of the increasing spiritual support which has sustained his art.”

Mukomberanwa’s works are in the collections of the Museum of Modern Art, New York; the Field Museum of Natural History, Chicago, the Indianapolis Museum of Art and the British Museum as well as in the National Gallery of Zimbabwe.

INFLUENCE ON OTHER SCULPTORS

Mukomberanwa died suddenly on 12 November 2002. All of his children became sculptors: his sons Anderson, Malachia, Tendai, Lawrence, and Taguma; and his daughters Netsai and Ennica. Another son, his eighth child, had tragically been drowned. Nicholas was also the uncle and teacher of Nesbert Mukomberanwa and mentor to African-American sculptor M. Scott Johnson. An appropriate quote from eldest son Anderson may serve as Nicholas’s memorial

…. a sage, a sculptor, a father to me, a father-figure to many, many sculptors working in stone in Zimbabwe. Although gone, he remains with us because his wisdom guides the sculptures we make, and the actions we take.