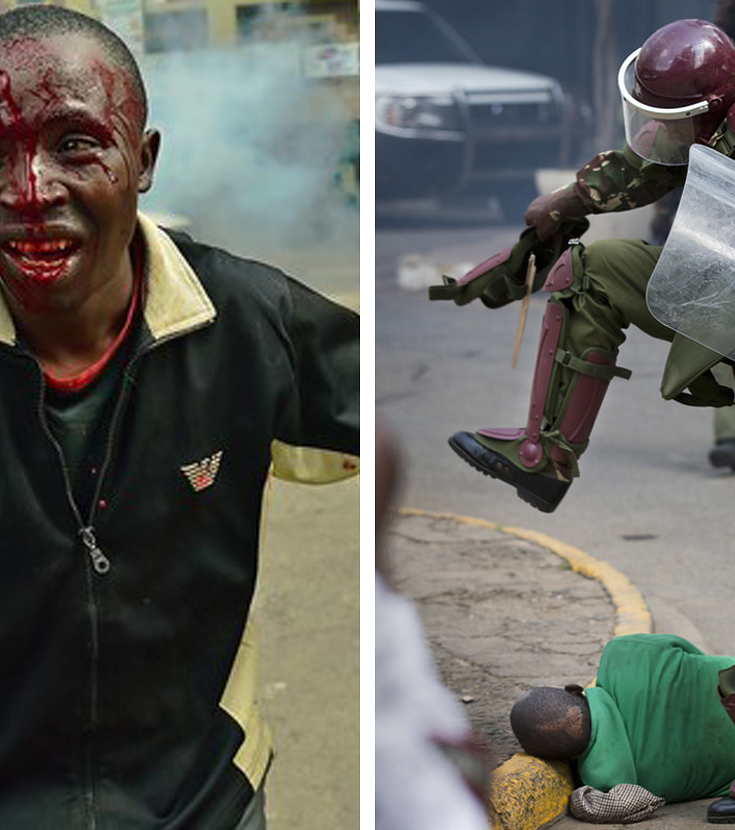 1. Images of violent clashes between riot police and protesters in Nairobi, Kenya were shared widely on Tuesday, with one image — taken by AP photographer Ben Curtis — of an officer apparently about to stamp on the head of a man with his head lying against the curb drawing particular attention. 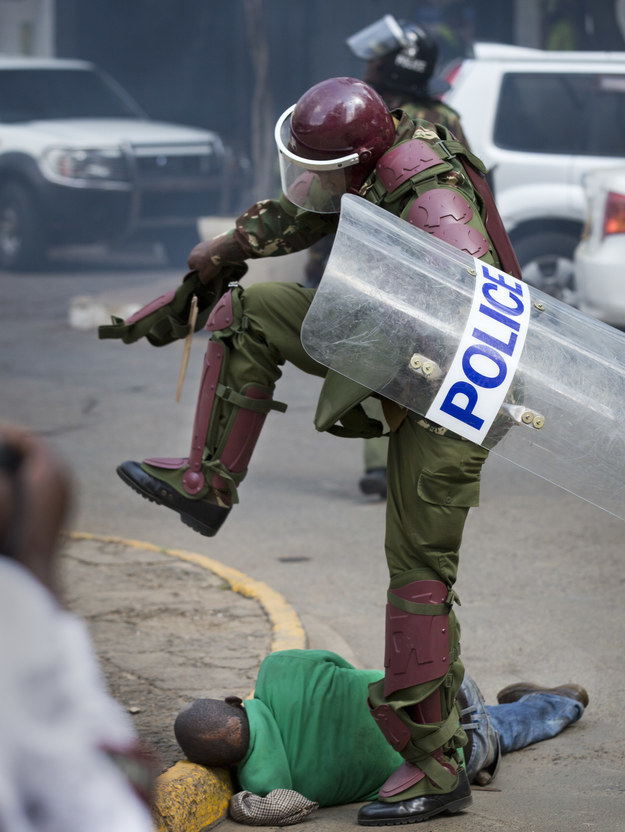 2. The photos were taken at an electoral reform demonstration on Monday, where one protester was pictured fleeing with blood pouring out of a gash on his forehead and running down his face, as police fired tear gas and wielded truncheons. 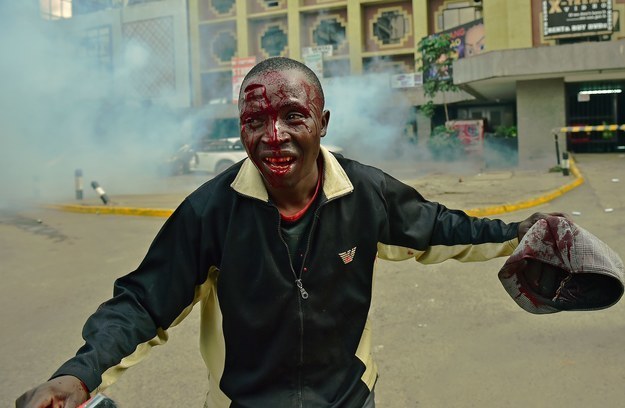 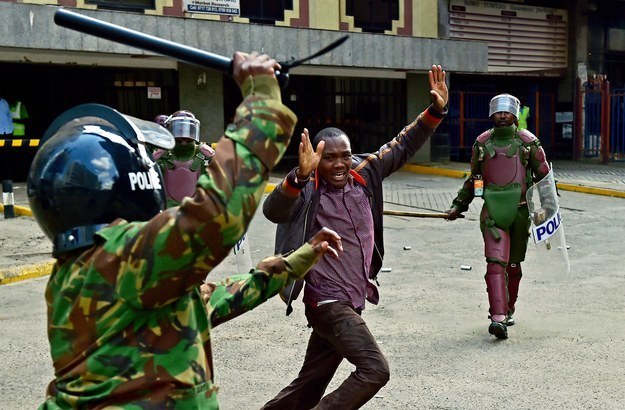 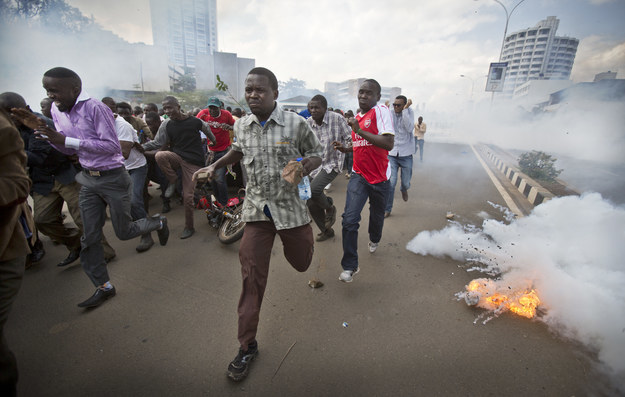 5. It is the images and video footage of three police officers reportedly taking turns beating and kicking an unconscious protester that have caused the biggest controversy. Kenyan news network NTV tweeted this clip of the incident:

Just how ugly things can get during demos… https://t.co/NsTGUrD6yw

The identity of the man and his current condition is not known, but NTV reported he had been chased by the officers for 50 meters.

6. The man was one of a number of supporters of opposition leader and former Prime Minister Raila Odinga, who had gathered at a rally to call for electoral reform, AP reported. 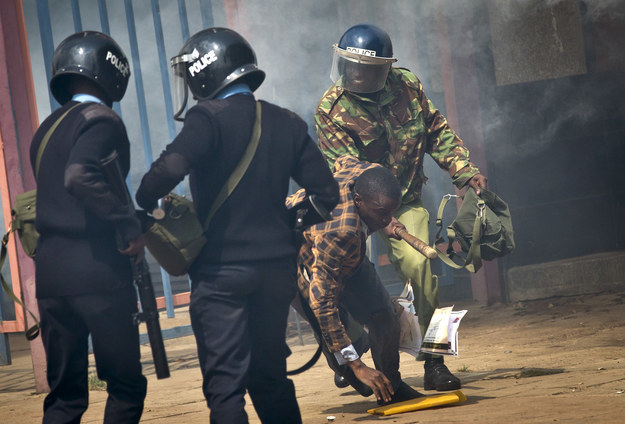 The protesters were demanding the dissolution of the country’s electoral commission, and accused it of bias towards the current president, Uhuru Kenyatta, according to AFP.

Odinga and civil society groups have accused the commission of irregularities which they say skewed the 2013 election result, which saw Kenyatta beat Odinga by 800,000 votes.

The protesters were demanding that new commissioners be named ahead of the next elections in 2017.

During the protest, lawmaker James Orengo told the crowd of around 500 people: “We have said now and again and we repeat here: (Electoral Board) commissioners must get out of office, they cannot be trusted to conduct a credible election,” AP reported.

Odinga was due to speak at the demonstration but cancelled when police intervened, apparently to prevent protesters storming the commission building.

7. Odinga later condemned the use of “undue force” by police.

Despite the use of undue force by police, our peaceful pickets shall continue every week until the IEBC is reformed.

8. Speaking Tuesday, Inspector-General of Police Joseph Boinnet said an internal investigation would be launched into the officers filmed beating the man, but said that other protesters had thrown stones at officers: 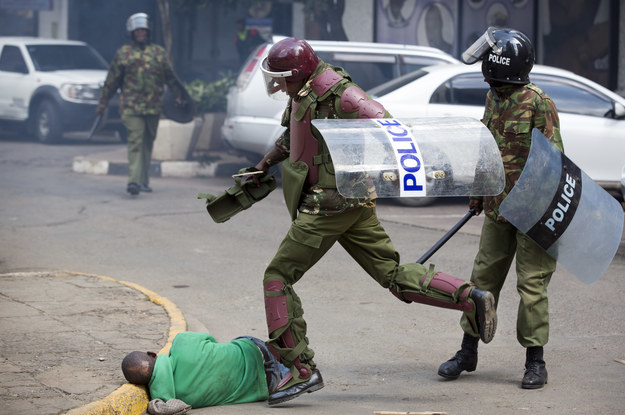 Boinnett said, according to AFP:

“I condemn the lawlessness visited on the public by rioters yesterday and an internal inquiry is under way to determine whether any police officer broke any law while quelling the riots.”

Isaac Okero, the President of the Law Society of Kenya, said of the incident:

“The officers who have violated the rights of citizens by their brutality must face both disciplinary process and criminal prosecution.”

He condemned the “bludgeoning of an apparently unconscious and unresponsive, unarmed man”.

Check out more articles on BuzzFeed.com!