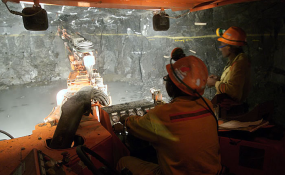 Platinum production from Zimbabwe is estimated to drop 10 percent this year to 440 000 ounces as output normalises at the country’s largest operation, according to the World Platinum Council (WPC).

In its first quarter report for 2017, the WPC said North American supply increased three percent to 405 koz in response to greater yield from the primary platinum group metals mines but this will be partly offset by depletion in the Sudbury region.

Following a period of restructuring in 2016, WPC said output from Russia may grow three percent this year to 735 koz. “Production from Zimbabwe is estimated to drop by 10 percent to 440 koz as output normalises at the largest operation.

“There are unlikely to be significant sales from stock in 2017 as producers have now restored their stocks to their planned steady state levels, which are at least 50 koz lower than in 2015 and 2016,” said the World platinum body.

Total platinum supply was 1,750 koz in the first quarter, a decline of four percent year-on-year, as a drop in primary supply (-90 koz) more than offset an increase in secondary supply (+25 koz). Global demand was one percent lower compared to first quarter of 2016 at 2,050 koz as weaker investment demand (-75 koz) outweighed gains in the automotive (+20 koz), jewellery (+20 koz) and industrial sectors (+10 koz).

Total platinum supply is projected to decline two percent year-on-year to 7,730 koz in 2017 as both primary and secondary supply are expected to decrease.

Refined production is forecast to fall one percent to 5,960 koz as slight increases in Russia (+20 koz) and North America (+10 koz) are outweighed by reductions in South Africa (-45 koz) and Zimbabwe (-50 koz).

Secondary supply is estimated to six percent to 1,760 koz. Jewellery recycling is projected to decline by 20 percent (-125 koz) to 500 koz this year as it returns to a more normal level in China after excess retail stock was returned to manufacturers last year, while autocatalysts recycling is expected to increase two percent (+20 koz) to 1,255 koz on improving volumes.

“This dip is attributable to restructuring (lower production targets) at some Western Limb operations, and lower yield from some Eastern Limb mines due to community disruption and depletion of reserves. Ramp-up of new shafts is projected to contribute around 120 koz this year,” said WPC.