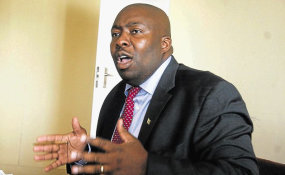 The majority of Zanu-PF provincial chairpersons yesterday snubbed a meeting called by the ruling party’s under fire political commissar Cde Saviour Kasukuwere at the party headquarters in Harare.

The meeting was held despite concerns by some chairpersons that Cde Kasukuwere should not be addressing such meetings until he is cleared on charges that have seen votes of no confidence being passed against him by the party’s structures countrywide.

He is accused of creating parallel structures to remove President Mugabe from power, corruption and fanning factionalism.

Masvingo’s suspended political commissar Cde Jappy Jaboon, viewed in the province as Cde Kasukuwere’s side-kick, was said to have been in the meeting.

One of the chairpersons that attended the meeting yesterday said their actions should not be misconstrued as support for the embattled Cde Kasukuwere.

“We attended the meeting because we realised that party programmes should continue,” said the chairperson who did not want his name to be used. “It should, however, not be viewed as support for Kasukuwere.”

“Yes, the meeting was held, but I can’t discuss with you what we discussed,” he said.

Cde Chengeta promised to comment late yesterday, but was no longer reachable in the evening, while Cdes Moyo, Undenge, Ncube and Choeni were not reachable last night. Cdes Tawengwa and Mafios could not be reached for comment as their cell phones went unanswered.

Contacted for comment, Cde Kasukuwere said he was happy with the attendance at the meeting.

“We were discussing the restructuring of the party from the cells, the branches, because soon there will be a roll out of the voter registration programme and we have to be ready,” he said.

Cde Kasukuwere accused The Herald of working against him as the political commissar of the ruling party.

“Why are you working to destroy the party?” he said. “You should not be involved in our issues, but leave us as politicians to settle them on our own.”

President Mugabe appointed a team led by Speaker of the National Assembly and Politburo member Cde Jacob Mudenda to investigate events leading to Cde Kasukuwere receiving votes of no confidence from all the party’s 10 provinces.

The team went to Mashonaland Central, Cde Kasukuwere’s home province which kick-started the process of passing the votes of no confidence. The team was expected to submit its report to President Mugabe for further discussion by the Politburo and possible forwarding to the party’s discplinary committee.

Party supporters in Mashonaland Central held demonstrations against Cde Kasukuwere, but the President intervened to stop other provinces from following the same course, saying members should follow laid down channels to air grievances to the party.