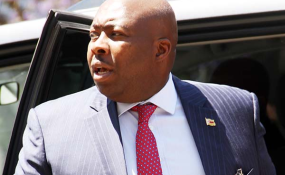 Zanu-PF political commissar Cde Saviour Kasukuwere should not attend meetings called by the Department of the Commissariat with provincial chairpersons to avoid disrupting programmes in provinces that rejected him, the revolutionary party’s provincial leaders said yesterday.

Their comments were triggered by reports that the Department of the Commissariat had called for a meeting with provincial chairpersons today in Harare which Cde Kasukuwere was billed to address.

Some chairpersons who spoke to The Herald on condition of anonymity for fear of victimisation said the party’s Commissariat Department was not supposed to stop functioning, calling for Cde Kasukuwere to recuse himself from meetings until his case is dealt with by the Politburo.

They said calling for such meetings by Cde Kasukuwere was tantamount to bullying provincial chairpersons, a situation they claimed was “disastrous”.

“We hear the meeting has been called by the Department of the Commissariat in Harare, not by Cde Kasukuwere. However, if it is true that Cde Kasukuwere wants to address us, then it will be disastrous,” said one of the chair- persons.

Weighed in another one: “We cannot be addressed by the person the people have rejected. The Department of the Commissariat should not stop functioning because of him. I am coming to Harare and if he is indeed going to address us, I will boycott the meeting.”

Cde Kasukuwere has been rejected by all the revolutionary party’s 10 provinces that joined his home province Mashonaland Central that accused him of an array of allegations, among them creating parallel structures to remove President Mugabe from power, corruption and fanning factionalism.

Cde Kasukuwere could not be reached on his phone yesterday.

“I have not been told about such a meeting tomorrow (today),” she said. “If the provinces are saying it was organised by the Commissariat Department, then the PC (Cde Kasukuwere) could have spoken with the office.”

Matabeleland South provincial spokesperson Cde Rabelani Choeni said although he was yet to receive the invitation, he had some commitments in the province.

“I have not been given the invitation yet,” he said. “I do not think I will be attending the meeting because I will be meeting visitors in Gwanda tomorrow (today).”

Said Bulawayo chairman Cde Dennis Ndlovu: “We hear there is a meeting in Harare. I am not sure if I am going to attend.”

Mashonaland West provincial chairman Cde Ephraim Chengeta, who earlier on said he would comment after an inter-district meeting in Karoi, was not responding to his phone late yesterday night.

“I have not received any information about that meeting,” he said before he terminated the interview.

Midlands provincial chairman Cde Daniel Mackenzie Ncube said: “We have not been informed about that meeting. Even if the communication is going to come I will not be able to attend because I have another programme that I have to attend at Chaka Business Centre.”

Although Manicaland acting provincial chairman Dr Samuel Undenge could not be reached for comment, provincial secretary for administration Cde Kenneth Saruchera said: “All the information relating to such meetings comes through our office, but as of now we have no such communication.”

Asked to comment on the legal status of Cde Kasukuwere to call for such a meeting given his rejection by the provinces, Zanu-PF Secretary for Administration Cde Ignatius Chombo said only the national political commissar was mandated to talk about his meetings.

“Ask the person who is calling for the meeting all those questions,” he said. “I know about my meetings. No one should ask why I am calling a meeting.”