Deprecated: /var/www/wp-content/plugins/amp/includes/widgets/class-amp-widget-text.php is deprecated since version 2.0.0 with no alternative available. in /var/www/wp-includes/functions.php on line 5523
 Robert Mugabe redistributed land from 6,000 white farmers to 245,000 black Zimbabwe farmers who now earn US$ 1 Billion in annual revenues from tobacco exports - Zimbabwe Today 
Notice: Undefined variable: fm_appid in /var/www/wp-content/plugins/facebook-members/facebook-members.php on line 81

Bonus Matashu points to a three-ton truck he bought for $15,000 (£9,360) in cash as an example of how President Robert Mugabe’s often violent programme of seizing white-owned farms and giving them to black Zimbabweans turned his life around. “This is the best thing that could have happened to me and my family and the generality of black Zimbabweans,” the former machine operator said at his six-hectare (15-acre) farm near the tobacco-farming town of Karoi, 93 miles north of the capital, Harare. “I now lead a far better life,” he says.

Mr Matashu, 34, says he was allocated land by the government in 2001 after a white-owned farm was seized and its former owner emigrated to South Africa. He grew cotton for a decade before switching to tobacco. This year he earned $34,000 and won an award for being the best small-scale tobacco farmer in Karoi.

Mr Mugabe said he embarked on the land-grab programme in 2000 to address the expropriation of land from blacks during the 90 years of white rule that ended after a civil war in 1980. While it helped him win rural votes and retain power, the economy was gripped by a decade of contraction, with plummeting exports of crops ranging from tobacco to roses. Zimbabwe’s economy, once one of Africa’s strongest, shrunk to half the size it had been in 1980.

About 18 white farmers were killed in violent takeovers of their land while almost all of the country’s 620,000 permanent and seasonal farm-workers were driven away from their homes, John Worsley-Worswick, the head of Justice for Agriculture, a Harare-based lobby group, said. Together with dependants, those workers accounted for two million people, he said.

While many maintain that Mugabe loyalists remain the main beneficiaries of the bloody land reform (the Mugabe family is now said to own more than 30 farms), some have suggested that it was not all bad. For example, though it says the methods used were inexcusable, a book entitled Zimbabwe Takes Back its Land by Joseph Hanlon concluded: “In the biggest land reform in Africa, 6,000 white farmers have been replaced by 245,000 Zimbabwean farmers. These are primarily ordinary poor people who have become more productive farmers.”

“We tackled the enemy head on and we got the land,” Agriculture Minister Joseph Made said in an interview. “They will never, never accept that there are now new owners on the land who have done wonders.”

Most of the rest of Zimbabwe’s agricultural industry remains in crisis, however. The rose and horticulture export business, formerly worth $87m a year, has largely disappeared. Once a corn exporter, Zimbabwe has imported the grain in recent years. 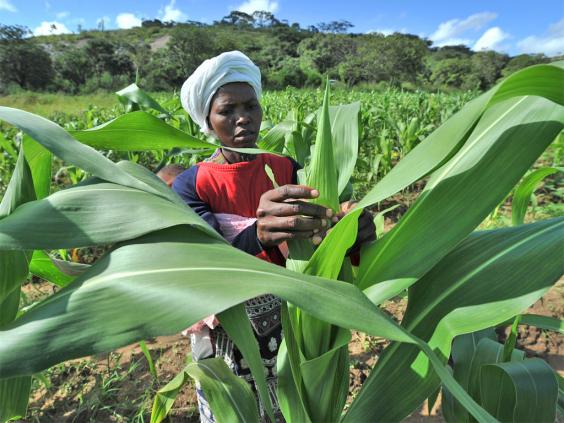 The tobacco industry is no longer marked by the pattern of large, white-owned farms, which have been seized and resettled. In 2000 the crop was grown by 1,500 large-scale farmers while 5,000 small-scale growers produced 3 per cent of the crop. This year 110,000 small-scale farmers grew 65 per cent of the crop, according to the government’s Tobacco Industry Marketing Board. While most of the tobacco used to be auctioned, most is now grown under contract for leaf merchants.

More than a fifth of the growers were registered this year, and farmers are being encouraged to grow the crop in the arid region of Matabeleland.

“It took the minority more than 50 years to reach 220 million kilograms,” said Lovemore Chikweya, regional coordinator for the TIMB in Nyamandhlovu, 230 miles south-west of Harare, in an interview. “With these new farmers that number can and will be surpassed within five years,” he said, forecasting production at 200 million kilograms in 2014.

With the violence associated with the land reform programme and a series of disputed elections resulting in sanctions from the EU and the US targeting Mr Mugabe and his allies, Zimbabwe’s tobacco farmers are now exporting more to Asia.

“Our exports to China have grown by over 50 per cent,” said Rodney Ambrose, head of the Zimbabwe Tobacco Association. “We have also established new markets, particularly in Indonesia and Malaysia.”

This year China acquired $197m worth of tobacco while Belgium bought $102m, the TIMB says.

Zimbabwean tobacco sold for an average of about $3.67 a kilogram this year, the highest since at least 1990, according to Mr Ambrose. “People are seeing that you can grow the crop and it comes in handy because the returns are much higher compared to wheat and cabbages,” Shandu Gumede, a 43-year-old farmer in Matabeleland, said. “I have no regrets.”

Source :
The Washington Post
Share
Previous London School of Economics : #Zimbabwe Land Reform a Huge Success, New Black Farmers Swimming in Prosperity
Next Dear Black Africans: I’m white and I will not be shamed for it, don’t blame me for your laziness and poverty