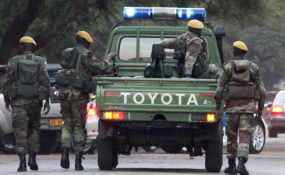 A South African man was reportedly arrested at President Robert Mugabe’s official residence in Harare, Zimbabwe over the weekend for trespassing.

Reports on Wednesday said that Adriaan Philip Olivier, 30, was a professional hunter employed by Save Safaris at Devure Range in Bikita. He was arrested along Borrowdale road at around 03:00 on Sunday while driving a Toyota Land Cruiser.

Olivier was found in possession of at least nine live bullets.

According to News Day, Olivier appeared at the magistrates’ court on Tuesday “and was slapped with two months’ imprisonment or alternatively pay a $150 fine after being convicted of trespassing at President Robert Mugabe’s official residence”.

He was convicted on his own plea of guilty, but he asked for the court’s leniency, as he argued that he committed the offence as a result of “getting lost”.

Olivier maintained that he was “not familiar with the rules and regulations of that area”, the state-owned Herald newspaper said.

The road was only open to motorists between 06:00 and 18:00 everyday for security reasons.

In passing sentence magistrate Lazini Ncube said that Olivier was a first offender, who pleaded guilty and did not waste the court’s time.

“First offenders need to be treated with leniency… In mitigation he said that he is not familiar with the capital. However, that is not an excuse for not observing road signs and police directions,” Ncube was quoted as saying.