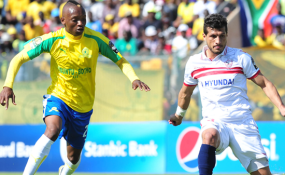 ZIMBABWE international footballer Khama Billiat had a brush with death in Johannesburg, South Africa, in the early hours of yesterday when six armed robbers pounced on the Mamelodi Sundowns talisman, held him hostage, before stealing his watch and wallet.

The 26-year-old Warriors’ star was, however, unhurt in the terrifying incident although he was left to battle the psychological trauma of coming face-to-face with the agents of crime who have turned South Africa into one of the most dangerous countries in the world.

The country is yet to fully recover from the brutal killing of former Bafana Bafana captain and Orlando Pirates captain Senzo Meyiwa.

Reports from South Africa said the robbers, who were armed with AK-47 assault rifles, pounced on Billiat when he stopped at an Engen service station.

“Billiat was at an Engen convenience store amongst three other shoppers in Kyalami, north of Johannesburg, when six gunmen entered armed with AK-47 rifles,” The Sunday World newspaper reported.

“The Zimbabwean was said to be buying pre-paid electricity at the time and had his watch and wallet taken during the incident. He escaped unharmed after the gunmen forcibly extracted money from an ATM.”

Mamelodi Sundowns spokesperson, Thulani Thuswa, told the same publication that their star player was fine after his horror ordeal.

“It’s very unfortunate and sad that such crimes occur in our country. We are very happy though that Khama is not injured or harmed in anyway.

“I spoke to him [Billiat] not so long ago and is he also happy to have escaped with his life. I asked him and he said he was going to put in petrol and buy some minor stuff, including prepaid electricity,” said Thuswa.

Billiat missed his club’s ABSA Premiership tie against Chippa United last night with coach Pitso Mosimane saying the forward was rested as he is currently nursing a dead leg and could be out for a number of games.

The Zimbabwe international has been on top of his game in South Africa since last season where he won the PSL Footballer of the Season Award, Absa Premiership’s Players’ Player and Midfielder of the Season.

He amassed R450 000 in prize money and his high-profile means he is a target for robbers who believe he could be easy prey and has a lot of money.

Yesterday’s Billiat’s parents told The Herald from their home in Harare’s Mufakose suburb that they didn’t know that their son had a brush with death in the morning.

His mother Rosa said she had not spoken to Khama by the time this newspaper contacted her and expressed shock at the attack.

She promised to furnish this publication with more details after speaking to her son but her phone was subsequently switched off.

The former CAPS United and Aces Academy midfielder was one of the star players who helped Sundowns win the South African Premiership and also capture their first CAF Champions League trophy last year.

Billiat played an influential role to help the Warriors qualify for the 2017 African Cup of Nations finals, scoring three goals in the qualifiers, and had a decent outing for the team at the AFCON showcase in Gabon in January.

There have been calls for him to move to Europe even though Sundowns revealed they have opened talks with him to extend his stay at the club.

Billiat is one of the footballers with the highest profiles in Africa and is reported to be the highest paid soccer star in the South African Premiership.

In January he was named by CAF as the second best footballer plying his trade on the continent last year, in a controversial poll which saw his Sundowns’ teammate, Ugandan international goalkeeper Denis Onyango, walking away with the big award.

Billiat, though, was named in the CAF Africa’s Best XI Team for 2016, which featured all players from the continent, including those playing for European clubs.

He is the first Zimbabwean star to feature at the FIFA Club World Cup where he represented Sundowns, as the champions of Africa, in Japan in December last year.

Source :
allafrica
Share
Previous Zimbabwe: Afro-Jazz Duo Tries Hand in Dancehall
Next Zimbabwe: Mugabe ‘Won’t Surrender Power to Anyone, Not Even to His Wife Grace’