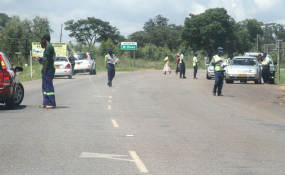 Bulawayo — Government is ready to invoke the Criminal Law (Codification and Reform) Act Chapter IV, Section 38 to charge police officers who throw spikes at moving vehicles, who face up to 10 years in prison and/or a fine of up to $3 000, an official has said.

Deputy Minister of Home Affairs Cde Obedingwa Mguni told our Bulawayo Bureau yesterday that members of the public who witness the “dangerous practice” should take video or picture evidence, so that the cops can be punished in the courts.

He said Government was ready to take action if law enforcers executed their duties in an unruly manner.

“If the Government receives tangible evidence of traffic officers throwing spikes under vehicles, then it will surely take action,” said Deputy Minister Mguni. “Of late we have been receiving complaints, but no one has brought concrete evidence of spikes being thrown at cars.

“Measures such as Level 12 fines of $3 000 or 10 years’ imprisonment can be taken against unruly officers. The Government doesn’t shield bad apples. This has been evidenced through the arrest of corrupt police officers who involve themselves in such crimes as stocktheft and illegal mining.”

The Criminal Law (Codification and Reform) Act Chapter IV, Section 38 states: “Any person who — (a) throws or propels or prepares to throw or propel any missile, article or thing at any person, motor vehicle, boat, aircraft or building with the intention or realising that there is a real risk or possibility of causing damage or injury.

“. . . leaves or places on or over any road anything with the intention or realising that there is a real risk or possibility of obstructing such road or endangering persons using it; shall be guilty of obstructing or endangering the free movement of persons or traffic and liable to a fine not exceeding level 12 or imprisonment for a period exceeding 10 years or both.”

“Some of the public transport operators are not professional,” he said. “Those who pirate “mushika-shika” taxis endanger people’s lives. Some of them do not have licences.

“They drive over those spikes oblivious of the dangers passengers can be exposed to. Driving a vehicle with flat tyres without pressure can cause it to capsize and roll, resulting in death.

There has been an outcry over the use of spikes which have been described as not being part of standard police equipment.

In Bulawayo, anti-riot police had to rescue a female police officer from an angry mob last month after she threw spikes under a commuter omnibus in the city centre.

Last week, Cde Mguni told Parliament that it is illegal for cops to throw spikes at moving vehicles, saying they should only be laid down on the road as security barriers.

“It is used to control traffic and for motorists to stop and obey the instructions,” he said. “A boom gate, a spike, a drum and a mobile plastic wall which is usually yellow are all called security barriers. They are used to stop or control traffic.

“The bone of contention is how they are put on the road. Spikes should be laid on the road so that an offender or any motorist stops and obeys what the police want.”

A cross-border transporter Mr Miseli Ndlovu said the police should investigate where the spikes were being made and charge those who make them with putting people’s lives at risk.

“We must also know who pays for them to be manufactured,” he said.

Mr Ndlovu said police should not be monitoring traffic in the city centre because it was the work of local authorities.

“When we grew up, we knew Traffic West and Drill Hall were responsible for traffic in the entire city,” he said. “Nowadays, every police station seems to have a traffic section, with cops bending the rules and endangering the public.”

Public transporters said police should just note down the registration number of a vehicle if the driver flees, instead of chasing after the vehicle or throwing spikes.