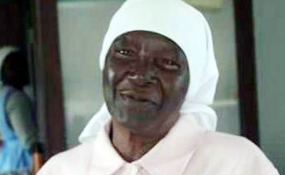 Mrs Mwazha, who was 79, succumbed to diabetes that she battled for a long time on Saturday afternoon at her home in Hatfield, Harare.

Mrs Mwazha was one of the influential woman in the country as she commanded more than half a million women in the AAC.

She was revered for her philanthropic activities, marriage construction and counselling, women and girls empowerment and unwavering support for her 99-year-old husband Archbishop Mwazha.

Mrs Mwazha’s rise to fame and fortune started in the late 80s when she started to run family businesses.

She later turned to full-time episcopal and clerical ministry focusing on empowering women both physically and spiritually.

Minister of Women Affairs, Gender and Community Development Cde Nyasha Chikwinya, conveyed the First Family’s condolences to the Mwazha family at the burial.

She said President Mugabe and First Lady Dr Amai Mugabe could not make it to the funeral due to national commitments.

“She (Mrs Mwazha) encouraged women to join the church, to be self reliant and pursue their dreams,” said Minister Chikwinya. “It is evident from the support she rendered to her husband that she managed to reach out to more than half a million women across the country.

“We have lost an icon in the women’s economic empowerment, a very steady woman, who was commanding over half a million Zimbabwean women through the AAC led by Mutumwa Mwazha.”

The president of the Apostolic Christian Council of Zimbabwe (ACCZ) Bishop Johannes Ndanga likened Mrs Mwazha to the biblical Eve.

“She was the horse of Africa, and the families across Africa have lost their Eve,” he said. “She was a pillar to Archbishop Paul Mwazha in the execution of his divine duty as the messenger of Africa.

“The winds have destroyed that pillar, and this has greatly affected her husband.”

Family spokesperson Tendai Mwazha, said Mrs Mwazha’s death had left a void that could not be filled.