#Ugandan activist detained for calling president ‘a pair of buttocks’

A few minutes into our interview at one of Kampala’s hotels, Stella Nyanzi’s lawyer tells us the place is no longer safe for her and she needs to leave. She is constantly monitored by security agents these days, she says, which is perhaps not surprising as the academic and activist is one of the fiercest critics of the Ugandan government. But she is not about to back down.

Not even the 33 days she spent in the country’s maximum security Luzira women’s prison for describing the president, Yoweri Museveni, as a “pair of buttocks” could change her stance.

“My language will grow sharper if the government continues to oppress us,” says Nyanzi, who was suspended from her job at Makerere University for “abusing” the first lady and education minister, Janet Museveni. Nyanzi called her a “big-thighed cow” with an “empty brain”.

On top of that, she has accused the Musevenis of raping the country and leaving millions of Ugandans in poverty during their three-decade rule.

“I am a critic of government and I choose the words to use [carefully],” she told the Guardian while out on bail.

“If you are going to stand with the powerless against the oppression [by] the powerful, someone will not like it. That person is usually the powerful.”

Nyanzi, who usually turns to Facebook to vent her wrath, was arrested in April and charged with cyber harassment for her criticism of the president. Her arrest followed an event for her campaign Pads4girlsUG, which is raising money to buy sanitary towels for girls who can’t afford them. She started it after the first lady told parliament earlier this year that the government did not have money to fulfil her husband’s election campaign pledge to provide free sanitary pads to schoolgirls.

At least 30% of teenage girls in Uganda miss school when they start having their periods.

The campaign has proved a success, with donations pouring in. Nyanzi wrote on Facebook that Pads4girls was her “most powerful achievement” of the past year.

Her arrest elicited widespread condemnation, with Human Rights Watchdescribing it as “the most flagrant attack on free expression in many years and a vengeful use of Uganda’s justice system to silence a government critic”. She is currently barred from travelling out of the country.

A trained journalist turned researcher, Nyanzi describes herself as “a lyricist, poetess, creative writer and analyst” on a quest for good governance. She’s unflinching in her criticism of government and is unafraid to tackle taboos around sex and gender and stand up for LGBT rights.

“Language is a tool and I refuse to be shut by anybody; we can listen to the rhetoric but also question,” says Nyanzi, whose PhD research at the University of London focused on youth sexualities and sexual and reproductive health in the Gambia, a culturally conservative country like many other African states.

Her candid use of sexual innuendos and talk of sex has angered moralists but earned her the support of young people who view old beliefs as having no place in today’s world.

Openly using words like penis or vagina is seen as immoral. Nyanzi is breaking those cultural beliefs, in a country where women are expected to be humble.

She stripped down to her underwear in protest when her boss at Makerere tried to evict her from the building. She told journalists then that “stripping was the only remaining option for her grievances to be heard”.

She likes to be called nalongo (a mother of twins – which she is, along with an older daughter), which locally symbolises strength.

She said people pretend that sex is a taboo, “but what do men discuss all the time? It is sex. So do the women when they are together,” she says.

“I stand with queer people and I may not necessarily be a lesbian but I know what it means to be marginalised because of my sexuality. It could be because I don’t have sex, or it could be because I am a single mum, or because I just sleep around with so many men,” she adds.

Yet such bold statements have led to accusations that she has mental health problems. The state tried to force her to be tested while in prison but she resisted. The state has also asked the court to compel her to be tested under the 1938 Mental Treatment Act. She filed a case against the government, opposing the testing. 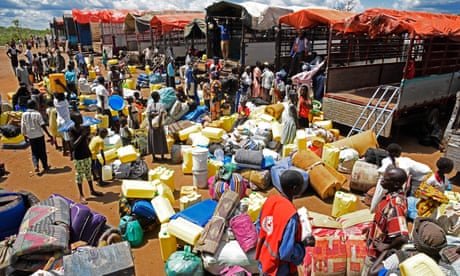 “They wanted to subject me to involuntary [mental] testing; I told them I have to volunteer myself. They can’t just pick me and test,” she says. “What happens after testing you is that they detain you on the pretext that you are mentally ill. That means they want to kill whatever questioning power I have.”

Although her arrest and detention appear designed to break her, she says the things they do to women in prison would not stop her.

“Like telling us to undress before other [prisoners]; I laughed about it,” she says.

“Telling me to undress … I undressed with pride and then turned the torture scheme into one of pleasure for other women.”

She wrote last month that her prison experience “strengthened my resolve to resist the Musevenis’ 31-year dictatorship”.

“Oh yes, [prison] purified my passionate disgust for the failed corrupt regime of [Museveni] … when I was a prisoner, my brain was sharpened for the long struggle ahead. In prison, I lost all fear of the systems and organs that uphold the gun-based system of patronage that entrench this reign of terror and family rule,” she said.

But when she was released on bail she looked frail and there were concerns about her health. “I had malaria. Mosquito nets are not allowed into the prison rooms because of fear that women can strangle themselves.

“I got a urinary tract infection because the toilets are bad. But also our pit latrine was full the first two weeks I was there. It took a rebellion for it to be emptied,” she says.

Nyanzi is due back in court on Tuesday. There have been calls for the charges to be dropped. But whether they are or not, or whether she’s returned to jail, it is unlikely the academic will ever willingly give up the fight.

As she wrote on Facebook to mark her 43rd birthday last week: “As I start another year of my life, I am looking forward to the prospects there are for me. I am grabbing this apple of my life, taking huge tasty bites out of it.”

Share
Previous While Zuma may want to be like Mugabe, South Africa is not Zimbabwe
Next Second hand clothing imports hurting Edgars Stores