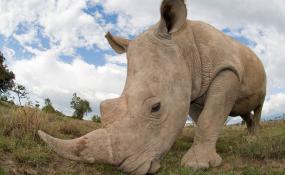 The head of Zimbabwe’s wildlife authority has been fired following the disappearance of rhino horns worth $3 million two years ago, it was reported on Sunday.

Edson Chidziya was suspended last year on full pay after he was accused of failing to alert the police when it was discovered that the horns were missing in 2015.

Now the Sunday Mail is reporting that Chidziya has been fired. Said the paper: “Mr Chidziya was fired for maladministration and abuse of office.”

A report from the board of Zimbabwe’s Parks and Wildlife Management Authority (Zimparks) quoted by the Sunday Mail said that Chidziya “failed to put in place security and control measures to prevent pilferage of rhino horns”.

The authority has a stash of more than 4 000 confiscated rhino horns at its headquarters. Some of them have been in the authority’s custody since 1989, according to official media. There are periodic calls for Zimbabwe to be allowed to sell off its horn. That move is opposed by those who feel it would fuel the trade in the horn, which is used in traditional Asian medicine.

Zimbabwe has around 800 black and white rhinos in total. They are in danger from poachers, as they are throughout the southern African region.

Police spokesperson Charity Charamba told the paper she didn’t know anything about the investigations into Chidziya.

Zimparks is now looking for a new director general, according to a job advert placed separately in the Sunday Mail.

The recruitment agency acting on behalf of Zimparks says the candidate must be 40 years or older and must have a Masters in conservation or ecology, an MBA and possibly a PhD.