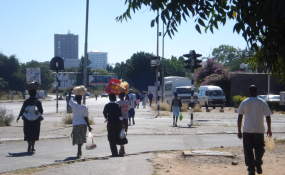 WOMEN bear the brunt of workplace inequalities as they face substantial entrance barriers and constitute the bulk of unpaid labour, a government official has said.

A Director in the Ministry of Women Affairs, Gender and Community Development, Edward Mapfumo said this hindered the country’s economic growth as it militated against stimulating aggregate demand.

He was speaking at last Thursday’s belated International Women’s Day commemorations organized by the Zimbabwe Chamber of Informal Economy Associations (ZCIEA) in Harare.

“Inequalities in the world of work continue to manifest with significant implications on women. On one hand we have globalization, technological and digital revolution and on the other hand, we have the growing informality of labour, unstable livelihoods and incomes; all of which must be addressed in the context of women’s economic empowerment,” he said.

Mapfumo said despite proving their mettle in almost all sectors of the economy, women continued to face many obstacles at the workplace.

He added that the creation of quality jobs for women ensured the country molded complete women, adding there was still a labour participation gap of 26 percent.

“The overall global female labour force participation rate is 50.3 percent, implying that half of all working-age women are either in employment or looking for employment while the other half are economically inactive, thus neither working nor seeking work.

Most local companies were still discriminating against women by asking female job seekers about their marriage and family plans, questions they never asked male prospective employees.

“Many companies while hiring women employees ask them openly about their marriage and family plans as they do not entertain the maternity leave and other flexibility perks.

“Managers and employers should never put a woman in a position to choose between her professional life and her personal life. Organisations should create an environment that promotes work and life balance,” he said.

ZCIEA National President, Lorraine Sibanda said with the high levels of unemployment in the country, the informal sector had become the biggest employer, with women making up the bulk of the informal workers.

She said the women in the informal sector also faced a horde of problems and had been under siege from both the local authorities and the police since the beginning of the year.

“There is therefore need for us to engage government, local authorities and other stakeholders to provide alternatives for vendors because there were no factories to employ people.

“The formal sector is retrenching employees every day and government should understand the need to co-exist and promote sustainable livelihood for those in the informal sector.”

Sibanda said women were forced to negotiate their continued stay in the streets, which exposed them to abuse by authorities.