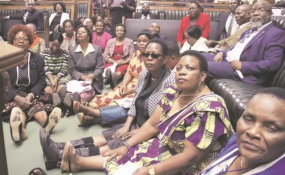 Photo: Tawanda Mudimu/Herald
National Assembly members sit on the floor in the august house in protest of the abuse of Zimbabwean women in Kuwait (file photo).

Slave trade may ring ancient but it is alive and full-tilt world over. New forms of objectification include human trafficking, debt bondage, sex slavery and child labour.

More than 200 Zimbabwean women were trafficked to Kuwait for slavery by a shady syndicate implicating a member of the Mid-eastern country’s diplomatic mission in Harare last year.

Children crossing the Mediterranean from Libya to Italy are routinely subjected to slavery, violence and sexual abuse at the hands of traffickers and people smugglers. “A Deadly Journey for Children,” the 2017 report by Unicef, details unsettling abuses suffered by almost 26,000 children who undertook the hair-raising journey to Europe last year.

The International Organisation for Migration (IOM) recently reported that hundreds of sub-Saharan Africans trying to reach Europe are being sold by militias in Libyan slave markets.

Debt bondage, a form of slavery whereby debtors from peripheral castes pay back with all their life’s labour, persists in some parts of India, Pakistan and Bangladesh, accounting for almost half the world’s slave population. “SOS – Sold Out Slaves,” an RT documentary chronicles the bit-and-lit tragedy of the cigar endured by Kenya’s child prostitutes, forced to fend their families and subjected to violence by their customers.

These new forms of criminal exploitation came under the spotlight at the Commission on the Status of Women’s 61st session (CSW61), held in New York from March 13 to 24.

“One of the great areas that was being pushed by the Government of Zimbabwe was trafficking. Trafficking was given its own paragraph, as to how we can address the issue globally,” said the UN Women country representative for Zimbabwe, Delphine Serumaga.

A gender facility of the United Nations, CSW annually convenes government representatives and civic activists to review progress in the implementation of the 1995 Beijing Platform for Action.

Herald Features got a taste of the “Beijing group,” which addressed as its priority theme, “Women’s Economic Empowerment in the Changing World of Work,” from a feedback symposium jointly pulled together by Oxfam and Women’s Action Group in Harare recently.

According to the UN Women representative, Zimbabwe had a strong showing at three side events at the New York conference which also reviewed challenges and achievements in the implementation of Millennium Development Goals (MDGs) for women and girls. “This year, Africa held its place quite strongly and this was because Africa chose to go with one voice. The parliamentarians and other delegates from Zimbabwe decided on points that needed to be included in the final agreements,” Serumaga said.

“If we don’t acknowledge that half of the population is part of the development, we will not be making any real change in Zimbabwe. In addition, without women’s agency or equality, if women are held back, they will not be any real development in Zimbabwe,” she said.

She pointed out that while government officials hold the ultimate responsibility for gender equality and women’s development, civil society must facilitate intersectoral engagement and sustain the flow of information to the grassroots.

The latter point is key especially since many abuses currently obtain under the cover of light-going euphemisms, including customs that prejudice women.

Human trafficking, a form of objectification which caught Zimbabwe by surprise last year, was high on the agenda. Speakers proposed ways to conclusively curtail the new slavery.

A Kuwaiti embassy official, Brenda Avril May, was arrested in March last year for selling Zimbabwean women into slavery by misrepresenting that they would be provided with employment in her country.

Zimbabwe subsequently entered a bilateral arrangement with Kuwait to recover the women who had been mostly deployed to unpaid house work, but some of them are yet to be repatriated.

Women Parliamentary Caucus chairperson Monica Mutsvangwa said it is important to make a distinction between externalisation of labour and human trafficking. “In Uganda they have made it a policy to licence every company which is recruiting their girls, whether they are going for nursing, housework or any other work,” Mutsvangwa said.

“They have realised that they can’t provide jobs, people need jobs and there is nothing wrong with externalising jobs. What is important is to come up with a framework to make sure that your citizens will never be shortchanged when they get there,” she said.

The Ugandan government has reportedly licensed more than 60 foreign companies seeking the services of its working population. According to the caucus chair, it would be foolhardy to bar citizens from seeking employment abroad so Government is entering bilateral agreements to make sure that job-hunting Zimbabweans are humanly treated in host countries.

“You also make sure that when they go there, they can send money back because a lot of these people want to go and look after their families back home. In cases where the channels for sending money are not visible, our citizens are shortchanged by the middle people who take a lot of commission,” she said.

“When we are talking, we only talk to the victims instead of also talking to those who are recruiting so that they also have proper understanding. Because of the way we approach, most of them are now in hiding. We try to go to victims and say: ‘Who recruited you?’ And they say: ‘Ah, a woman in Chitungwiza, or someone in Vainona.’

“By the time we go there, they would have vacated. We have scared them with our approach so that they can’t even give us information about how they are employed. All we know is our women were taken to Kuwait by people who were taking money from them. But how do we engage the culprits? I have not seen such a forum,” Nyamupinga said.

“Beijing” has come to be regarded as a buzzword of Sharia feminism and this seemed to give into Oxfam’s reform activities around the area of unpaid care work. However, further unpacking showed the economic implications, for modern women, of work arrangements routinely taken for granted.

Oxfam representative Roselyn Nyatsanza said interrogation into why many women do not take up the development initiatives and economic opportunities designed for them has previously implicated negative social norms, gender-based violence, low education levels and limited access and control of resources as the main barriers.

“But over the past few years, since 2013, we started unpacking women’s heavy and unequal responsibility for caring as a barrier that wasn’t being addressed. It begins with realising that house work is work and the care economy has been left out of the agenda for quite a while,” Nyatsanza said.

“We began to realise that there complaints about a lot of normal activities that women and girls predominantly do such as washing of clothes, cooking. These were not being seen as problems of rights that needed to be addressed within the development sector.

“What we then found is that women provide most of this unpaid care work and this becomes an invisible limit on their ability to empower themselves,” she said.

Nyatsanza said her organisation acknowledges care work as critical for human well being and as a social good necessary for the economy, households and communities.

Women Parliamentary Caucus vice chairperson Paurina Mpariwa also presented on women in mining at the CSW61 and chaired a session on behalf of Women Affairs minister Cde Nyasha Chikwinya. “The most interesting session for me, since I come from the labour movement, was on countries not having done well in ratifying instruments that protect women and children. In 2011, the International Labour Organisation (ILO) did a convention on domestic workers which Zimbabwe has not yet ratified,” Mpariwa said.

“We fail in our responsibility as women to respect those women who actually make it possible or us to operate in our professional spaces. The ILO convention has a package of provisions to protect these women, protection against sexual harassment at the workplace,” she said.

Mpariwa lauded the Zimbabwean constitution for being in sync with most of the issues raised at the convention in relation to women’s and workers’ rights and highlighted experiences shared by her South Asian and Asia counterparts at CSW61.

The final resolutions from the New York event include an elaborate segment addressing the growing informality of work and mobility of women workers.

It stresses the need to transition to formal employment women in informal, home-based, agro-based work and SMEs by providing social protection and wages that allow for an adequate standard of living, and addressing unsafe and unhealthy working conditions.

Nations are urged to adopt gender-responsive migration policies synced to international law and to promote the economic empowerment of women migrant workers regardless of their migration status.

The convention also called on member states to implement comprehensive anti-trafficking strategies that uphold human rights in a gender and age-sensitive manner and take measures to reduce the vulnerability of women and girls to modern slavery and sexual exploitation.