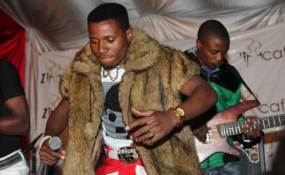 Until he got to Grade Six, Peter Moyo did not know that he was Tongai “Dhewa” Moyo’s son.

He would pass by the late musician’s house admiring people and events at the celebrity’s home, yet he did not know that he was in his father’s territory.

That time they stayed in the same neighbourhood and Peter would pass by the house when he was going to and from school.

His mother delayed to tell him about his father for personal reasons. Peter was staying with his grandmother and seven other grandchildren while his mother had relocated to South Africa.

It was after he had just completed his Grade Six that his mother decided to tell him the truth. By then, Dhewa had moved out of the Mbizo neighbourhood to Masasa.

“My mother said he wanted to introduce me to someone important in my life and we headed for Masasa. It seems she had told my father about it. She had just come from South Africa and she packed my clothes, but I did not understand what was happening,” said Peter.

“When we arrived at Dhewa’s house I was surprised with the introduction. I was too young to understand what was happening and I just got excited with the revelation.

“That was the time I began staying with my father. He transferred me from Dambudzo Primary to Kwekwe Primary school. It was a better school and I was happy about it.

“However, I did not want to be known as Dhewa’s son because I was not so close to my father. People only got to know that I was his son when I was at Chaplin High School when he came to visit. Other pupils were excited and they were surprised that I had not told them about my father.”

Peter said he rarely discussed serious issues with his father.

Peter played for Lancashire Steel Football Club juniors before he went to South Africa where he joined the junior team at Ajax Cape Town football club.

When his father fell ill, he was asked to come back home and he did not know that the journey from South Africa symbolised the beginning of his journey in music.

“In 2011, he started talking to me about music, but I was not interested at all. He told me to come home and I just agreed because of his condition. I thought I was coming to see him and I did not know I would end up on stage.

“I returned from South Africa in July and he died in October. He tried to convince me to take over his music, but I always refused. He gave me the task to drive a kombi that carried band members to shows and I agreed.

“Most of the time I would just drop the guys and find somewhere to go or I would sleep in the kombi waiting for them to finish the show. I was rarely in his shows.”

However, as Dhewa’s condition got worse Peter found himself in the deep end. His father was supposed to perform in Botswana and he could not make it. It was a week before his death and his condition was getting worse.

“People were waiting for him in Botswana and I went with the band. Shiga Shiga (Gift Katulika who is the band’s chanter) said I had to go on stage and explain why Dhewa had not come. We did two songs but I did not know the lyrics. I was just following what others were doing. It was fortunate that people in Botswana understood the situation, otherwise it could have been chaotic.”

Peter said Dhewa’s doctor had given the musician strict instructions against going on stage prematurely. He said Dhewa used to sneak from hospital to go for shows and the doctor was not happy.

A day before Dhewa passed away, Peter had a meeting with his father and the doctor.

“His condition was getting worse and he could not do much. It was a Friday and he had a booked show with Chipaz Promotions. We had a meeting and the doctor told me there was no way my father could go for a show in that condition. He also said my father’s condition had worsened because he had not listened to doctors’ instructions and continued to do shows when he was supposed to rest.

“My father told me that I had to take over the band. He said ‘you are my son and you are old enough to do this. I am losing this battle and I want you to take care of the family. The only way is to take over the band. Please go and perform tonight. Go and lead the band. It is now your band and all your siblings will be looking up to you. They need food and clothes. They need school fees and you should look after them’. I realised that things were getting worse and I just agreed to go for that night’s show to please him. I was planning to go back to South Africa when he recovered.”

That night Peter went on stage with Utakataka Express and they only did one song, “Samanyemba”, because they were sharing the stage with many other musicians. They explained Dhewa’s situation and people understood.

The following day Dhewa died and Peter saw the reality of his father’s plea. He had to look after the family yet he also wanted to return to South Africa to pursue his soccer career.

“After the show we went to the hospital the following morning and my father was in intensive care unit. We went to see him but he could not talk anymore. The words he had said before the show were his last words to me.”

Dhewa had booked shows for October and November and promoters pleaded with Peter to help the band fulfil the assignments.

He was adamant about returning to South Africa until his grandmother intervened.

“I am close to Gogo Chihera and I listen to whatever she says. She told me that I had to do what my father had said. She also said Dhewa had told her that he was appointing me to take over the band. She insisted that I do as my father had said and I gave in.”

That was how Peter took the reins at Utakataka Express. His tenure has had its ups and downs, but the young man soldiers on. On May 25 he will be releasing his third album titled “Mopao Mokonzi” and he has begun sampling new songs at his shows.

He continues on that campaign and tonight he performs at Dandaro Inn while tomorrow he will be at Eland Bar in Kuwadzana 6. He is trying to keep his father’s legacy alive.

Source :
allafrica
Share
Previous The Best Foreign XI
Next U.S.$1 Billion to Be Set Aside for Command Agric