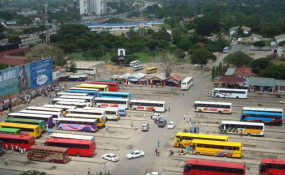 Know how to tell a fake Zimbabwe cop from a real one? It’s all in the boots.

A teacher who dressed up as a cop so he could hitch a free ride on public transport on Monday was rumbled when the driver noticed his boots weren’t the real ones, according to a report in the state-owned Chronicle.

Twenty-six-year old Thembalenkosi Ndlovu, from remote Binga in northern Zimbabwe, had the right trousers on (navy-blue riot cop gear) and the right shirt (it even had the badges on for a police inspector), the report said.

But the boots were Timberland. The driver knew they and the belt weren’t right, so he drove the teacher to a police station in Bulawayo, said the Chronicle. Ndlovu tried to run away but was caught and arrested.

It’s not clear where Ndlovu got the trousers and shirt from, though the Chronicle suggests in its headline that the gear was stolen.

It’s an offence in Zimbabwe to impersonate a police officer, as it is to wear an incomplete police uniform. Police officers often claim free rides on public transport, a practice that annoys ordinary commuters and some bus-owners.

News that it’s important to check out a policeman’s boots will be helpful to civilian drivers in Zimbabwe who get stopped by cops asking for (or demanding) free lifts.

Fake cops are not unheard of in the southern African country, and there are often questions over whether some of the roadblocks mounted on the country’s roads are manned by genuine officers.

In the latest case, how did the bus driver know that Ndlovu’s boots weren’t the right ones?

He was a former cop, that’s why.