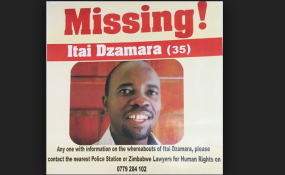 Political activist, Itai Dzamara, who was abducted by unknown assailants in March 2015, is one of the four human rights heroes that have been honored by Amnesty International with a Lifetime Achievement recognition.

He was abducted by suspected state security agents. The government, which has professed ignorance over his abduction, was ordered by the High Court to find the political activist, who was recently named the Overall Human Rights Defender of the Year 2015 in Zimbabwe.

Dzamara gets the international honor alongside Berta Cáceres of Honduras, Narges Mohammadi of Iran, and Sirikan Charoensiri of Thailand.

Celebrating the four activists at the time of the Oscar Awards help in Los Angeles on February 26, Neistat said, Dzamara’s life resembled a movie script.

“But this isn’t Hollywood. This is Zimbabwe, where basic rights and freedoms have been trampled on throughout the long years of Robert Mugabe’s reign.”

The missing journalist’s brother, Patson – who is now an activist after Itai’s abduction – has told Zimbabwean media that there are plans to film a documentary in his owner.

Dzamara criticized the government’s record, and particularly wrote a petition that he personally delivered at the office of the president, before his forced disappearance.