Zimbabwe: The Age of Mugabe and the Age of Ideas 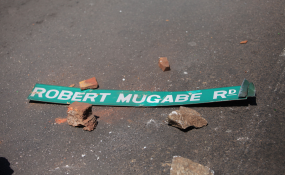 Robert Gabriel Mugabe, the Pan Africanist and internationalist who was elected Zimbabwean Head of State thirty seven years ago, was 93 this Tuesday February 21. He had for decades championed the slogan “Zimbabwe for Zimbabweans.” Under this, he got the economic control of his country transferred from the minority White racists, to the majority Black population. This was more impactful on the land issue which his neigbours in the Region; Namibia and South Africa are still grappling with, without any solution in sight.

Having being heavily criticised and vilified over the years for not allowing the mythical market forces to take over Zimbabwe, this week, as he celebrated his birthday, he praised American President Donald Trump who has a similar policy: “When it comes to Donald Trump, on the one hand talking of American nationalism, well America for America, America for Americans – on that we agree. Zimbabwe for Zimbabweans”.

However, the more concrete issue is that of succession as Mugabe reiterated his resolve to contest for the Zimbabwean Presidency in 2018 when he would be 94. Ahead of his birthday, he had said: “They want me to stand for elections, they want me to stand for elections everywhere in the party … The majority of the people feel that there is no replacement, successor who to them is acceptable, as acceptable as I am”. Perhaps, in a moment of self-doubt, he added: “Of course, if I feel that I can’t do it any more, I will say so to my party so that they relieve me. But for now I think I can’t say so”.

The run-up to this was the ruling Zimbabwe African National Union, Patriotic Front, ZANU-PF, Conference on December 16, 2016 in Masvingo, Southeastern Zimbabwe, some three-hour drive from Harare through breathtaking countryside. For me, my most memorable recollection when I visited Masvingo in 2013, was that a street in a former White neigbourhood was named after General Josiah Magama Tongogara the guerilla fighter who led the Zimbabwe African National Liberation Army, ZANLA, the military wing of ZANU-PF while Mugabe was the political head. Tongogara had died in a motor accident on December 26, 1979, four months before independence.

At the Masvingo Conference attended by about 9,000 delegates, the party had declared Mugabe “as the sole candidate for the forthcoming 2018 elections”. Perhaps, the most ridiculous and self-serving pronouncement on Mugabe’s ill-advised decision to run at 94, came from his 51-year old wife, Grace, who declared: “One day when God decides that Mugabe dies, we will have his corpse appear as a candidate on the ballot paper … You will see people voting for Mugabe as a corpse. I am seriously telling you – just to show how people love their President.” In truth, Mrs. Mugabe may just wish to preside over Zimbabawe in the name of her husband, so in reality, she may be the “corpse” appearing on the ballot paper. First, let me clarify that fundamentally, it is not the age of a man that matters, but the age of his ideas, and I consider the ideas of Mugabe quite vibrant and young. However, aging makes our bodies less able to carry out routine functions. With age, our reflex or reaction time slows down and muscles become lax. It is not for nothing humanity has retirement age. Even hereditary rulers sometimes give way as happened in July 2013 when Belgian king Albert stepped down as Head of State for Crown Prince Philippe.

Many developed countries have put their future in the hands of the young. Barack Obama was 48 when he became American President in 2009 and left office at 56 after two terms. Canadian Prime Minister, Justin Pierre James Trudeau was 44 when elected in 2015.

I agree that neither the United States nor Canada face the kind of external challenges Zimbabwe faces including punitive and ruinous sanctions by the West and their seeking a pound of flesh for the audacity of Zimbabweans to repossess their ancestral lands. I know that the dignity of the average Zimbabwean in relation to the Whiteman and in contrast to the mindset of many Namibians and South Africans, came at a high cost.

I know that even where the ZANU-PF has primarily, retained power through free and fair elections including the 2002 one in which I was part of the Africa Union Observer team, the West continues to subvert and pooh-pooh the electoral process in that country. I am aware that maintaining political stability and coping with years of drought, come at a high cost. However, no matter its contributions to the liberation struggle or how glorious its reign has been, the Mugabe era has to come to an end. It is a matter of when it will, and I think it is better for both Mugabe and the ZANU-PF to begin the transition.

Mugabe must not be taken in by a sense of indispensability nor should the illusion be created that he is the only person who can lead Zimbabwe. There will be a successor whether he plans for it or not; that is the law of nature. In Nigeria, our elders say nobody can wear out the world ; it is the world that wears out people and discards them.

He needs to learn the basic lesson Nelson Mandela taught the world. Mandela was imprisoned for 27 years and became the first democratically elected President of South Africa at independence in 1994 when he was 76. Despite his cult-like following both inside and outside his country, he declined to have a second five-year term which would have been his for the asking. He preferred the younger, more youthful generation took over.

If after about four decades, Mugabe cannot produce worthy successors, then it is a failing of his leadership. Also, if after thirty eight years of unbroken leadership of Zimbabwe, the ZANU-PF cannot find a worthy successor to Mugabe, then the party needs a rebirth.

Although a man can symbolise a country and become its vibrant voice, he cannot replace that country; like soldiers come and go while the barracks remain, so do leaders come and go, but the country remains.

The enthusiastic Zimbabweans shouting ‘Tongai, Tongai Baba! ‘ (Rule, Rule Father!) remind me of John Pepper Bekederemo Clark’s poem “Streamside exchange”. In it, a child asked the River bird that was ‘Sitting all day long On hook over grass’ “Will mother come back today?” The bird answered: “You cannot know And should not bother; Tide and market come and go And so shall your mother.” Mugabe came and will go; for that matter, so shall you and I.