Arrested Diamond Workers ‘Had to Search Their Own Faeces’ – Report 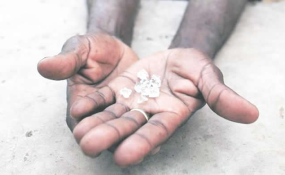 Three diamond workers arrested in eastern Zimbabwe for allegedly swallowing gems had to pick through their excrement to find them, it was reported on Friday.

The three, all employed by the Zimbabwe Consolidated Diamond Company, have told a court in Mutare that they were forced to eat a diet of “groundnuts and fresh milk only for days” which brought on diarrhea, the Manica Post reports.

The men were arrested early in the morning of March 5 after a security guard said he saw them swallowing diamonds as they worked on a blocked conveyor belt in Chiadzwa, Zimbabwe’s rich dry gem fields that were the site of a military crackdown in late 2008.

Defence lawyer Chris Ndlovu was quoted as saying: “The police would also force them to excrete in buckets while they watched them thereby denying them their right to privacy.”

The three were taken for X-rays at a local hospital, where “foreign bodies” were seen. They were granted $200 bail this week even though they had not excreted any diamonds, the Manica Post said.

The Zimbabwe Consolidated Diamond Company is a state-owned diamond firm formed when President Robert Mugabe’s government said private companies operating in Chiadzwa had to stop mining and merge. The move was resisted by some firms.

In 2015, a Zimbabwe man was caught at the border post linking Mutare to Mozambique with 72 diamonds in his briefs.