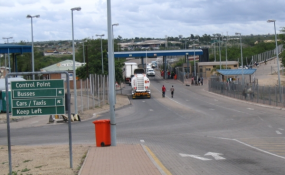 Thirty tons of school books collected in Bedfordview and meant for distribution to schools in Zimbabwe are stuck at Beitbridge Border Post because the state revenue authority is demanding tax, reports say.

The official Herald newspaper says the books were destined for 11 schools in Bulawayo, near where President Robert Mugabe will hold his birthday party on Saturday.

The book shipment was organised by Chitungwiza Rotary Club, which says it’s been doing this without problems since 2011.

Past president of the group Denny Makoni said the books had been held up at the border for the past two weeks after the state ZIMRA revenue authority “made new documentation requirements” and demanded the payment of duty, the Herald reported.

Zimbabwe began imposing a tax of 40% on imported books in 2015, to widespread outrage.

Commenting on the hold-up of the books, one Zimbabwean Facebook user said grimly: “They will be probably taken and used in campaigning by Grace.” That was a reference to the First Lady Grace Mugabe who has previously distributed goods seized by the state ZIMRA tax authority at rallies.

BookAid.org, an organisation that distributes religious books for sale in Zimbabwe, reported at the end of last month that a container of books had been impounded and held up for a year after the authorities demanded 40% tax and a charge of $1 per kilo of books. According to the group’s website, the books were finally released – but a storage charge of $4 000 US was then imposed.