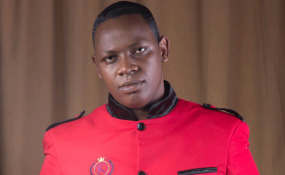 Gweru-born and South Africa-based “Prophet” Gerry King who made headlines three years ago after diamonds reportedly fell during a church service in Chiredzi has taken the neighbouring country by storm after thousands of followers flocked to his church service.

Multitudes of followers of different nationalities throng Boksburg in Johannesburg where the 29-year-old charismatic man of the cloth usually holds his worship services and crusades.

“It is not so much about popularity, but the good hand of God that is manifesting itself through the work I am doing,” King said from his new base in South Africa.

“South Africa needs Jesus at this time like no other time and if you are looking for Jesus, then King’s Palace International church is the place to be.”

Prominent gospel Zimpraise artists Ellard Cherayi, Sharon Manyonganise and Marble Madondo are some of the musicians who have graced the Heaven on Earth Worship services where believers from Korea and Sweden, among other countries, have visited the church for healing and deliverance.

There are videos of people living with disabilities being healed which have gone viral on social media, including that of an HIV-positive woman who now claims to have tested negative.

Last year in November King held a crusade in Swaziland and filled a 30 000-seater stadium where “miracles” were performed.

“I declared rain to come down that hadn’t come for years and after the crusade it rained,” he said.

King, who also revealed plans to soon open a television channel called Glory TV, is married to Natalie and the couple is blessed with a three-year-old daughter, Jahdiel Camilla.