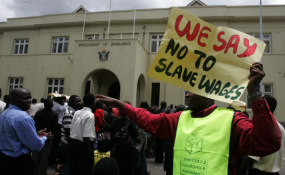 Zimbabwean doctors working in public hospitals went on strike Wednesday demanding better pay and improved working conditions at a time the government is struggling to pay its workers on time.

The doctors said they were embarking on the job boycott because the government had failed to review their on call allowances from $288 a month, for the lowest paid doctor, to $720.

Zimbabwe Hospital Doctors Association president Edgar Munatsi said the medics were also being overworked after the government put a freeze on the recruitment of health workers.

“All doctors from the consultant level upwards are expected to cooperate as this historic action will prevent the ensuing cancerous destruction of our profession,” Dr Munatsi said.

He said the government had reneged on previous commitments to improve doctors’ living conditions.

“The association is puzzled by the lipstick approach from the Health ministry to honour the agreed on call allowances with our previous leadership,” Dr Munatsi said.

He said the government has also failed to provide duty-free car loan scheme for the medics.

“Our doctors, including well-trained consultants, travel to work using public transport despite an earlier promise to unveil a motor vehicle duty-free facility to the sector.”

Health minister David Parirenyatwa pleaded with the workers to return to work, saying some of their demands had already been addressed.

He said the government has created 250 posts for doctors and 2,000 jobs for nurses to ease the workload in public hospitals.

“We have been negotiating with the Ministry of Finance for posts since November and we have been offered 250 posts for doctors and 2,000 for nurses,” Dr Parirenyatwa told NewsDay newspaper.

“I am urging them (doctors) not to go ahead with the industrial action,” adding that “We need to look after our patients.”

President Robert Mugabe’s government is yet to pay civil servants their 2016 bonuses, three months after they became due.

The government has also not been paying salaries on time since early last year owing to dwindling revenues.

Zimbabwe’s health sector is suffering under the weight of understaffing and a severe shortage of drugs.