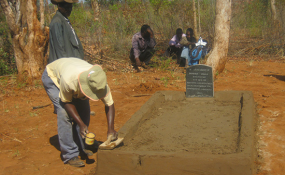 Photo: New Zimbabwe
A family working on a grave of their relative who was killed during the period.

Bulawayo — Acting President Phelekezela Mphoko has said that the Government will not dig up mass graves of people who died during post-independence disturbances in Midlands Province and Matabeleland region, saying to do so is unAfrican. The Acting President who is also the Minister of National Healing, Peace and Reconciliation said the Peace and Reconciliation Bill was already in place and would be tabled before Parliament next week.

“We cannot go to the mass graves and start digging. It is not in our African culture. What we are only going to do is to put a big plaque which will indicate that there are people who were buried there,” he told Parliament on Wednesday.

“Those with bones that are visible by the grave site, we will take the bones and rebury them properly. It will be done within the law.”

He said the drafting of the Peace and Reconciliation Bill was now complete to address the “five scars of the disturbances.”

He said among the scars was the issue of identity documents and reburial of people buried in open graves.

“I have said there are five scars of Gukurahundi. The first one is death and birth certificates. The second one is the reburial of people, especially those who had bones that are still visible outside the graves. The third one is empowering the people. Mr Speaker Sir, those five points are critical because we have already spoken to the Minister of Home Affairs about it,” he said.

An announcement would be made and there will be mobile stations in all the areas all over the country for people to get birth certificates.