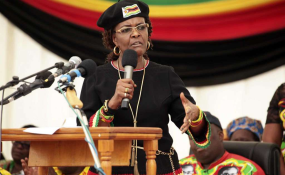 Fugitive Lebanese businessman Mr Jamal Ahmed who last year wrongly accused First Lady Dr Grace Mugabe of grabbing his houses in Harare, is now seeking to sue the police after learning that the properties in question were under police guard as part of investigations. Several newspaper articles were written dragging in the name of Dr Mugabe and her son, Mr Russell Goreraza, but it later turned out that the two had nothing to do with the protection of the immovable properties.

Mr Ahmed even obtained a High Court interdict against the First Lady and Mr Goreraza before the police disclosed that the safeguarding of the property was a police operation.

Dr Mugabe, through her lawyer Mr Wilson Manase of Manase and Manase Legal Practitioners, has since filed an application to have the High Court interdict discharged.

While the discharge application was pending, Mtetwa and Nyambirai Legal Practitioners, acting for Mr Ahmed, filed an application to have Police Commissioner General Augustine Chihuri and other two senior detectives from CID Law and Order cited as respondents.

Mr Ahmed has now shifted his attention to the police and the application has been set down for hearing tomorrow.

Mr Ahmed wants the top police officers to be ordered to file their responses.

“The respondents must be brought before this court in the main matter as it has now become clear that they individually abused their authority in assisting Dr (Grace Mugabe) to take possession of applicants’ properties without any due process, he said.

“I specifically contend that their presence before this court is required as a matter of necessity as the main matter requires that they substantiate their allegations directly, which up to now they have failed to do to my legal practitioners.”

Mr Ahmed contends that no law has been cited to support the occupation of the properties by the police.

“No one has alluded to any law that allows the parties to act as they did on October 14 2016, he said.

“I am advised that it is trite that the joinder of a party is required as a matter of necessity, as opposed to a matter of convenience.”

The police contend that they are investigating Mr Jamal over an assortment of allegations and a warrant of arrest has since been issued against him.

They contend that the protection of his property by the police was part of their investigations.